Villanova coach Wright gets 600th win in victory over Butler 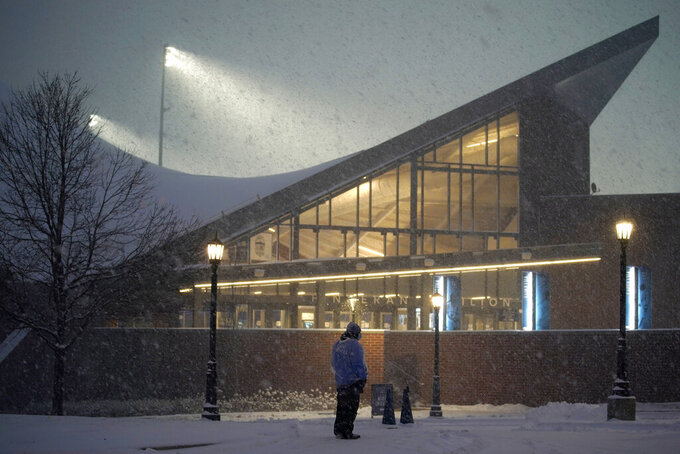 VILLANOVA, Pa. (AP) — Jay Wright flashed the “V” toward empty bleachers and then encountered a divine interception on his way to celebrate in the locker room. His face red and bundled in winter clothes, the Rev. Peter M. Donohue stopped Wright to congratulate him on his 600th career coaching victory.

Donohue, Villanova’s president, had no idea Wright was near the milestone until he heard it mentioned on TV. So he walked in the snow to the Pavilion — even in this era with no fans allowed inside the arena, a Very Important President gets a free pass — to greet Wright after the victory.

Donohue wasn’t alone in nearly missing No. 600. The Wildcats were set to head home until graduate assistants clued them in on the mark.

“I was confused because I thought somebody would have mentioned it,” guard Collin Gillespie said.

Already a two-time national champion and the winningest coach in program history, Wright won his 600th career game in the No. 7 Wildcats’ 85-66 victory over Butler on Wednesday night.

“It just means I know I have a really good job,” Wright said.

Wright (600-268) became the 39th coach in Division I history to reach 600 wins. He is 478-183 at Villanova since he was hired in 2001 and has built the Wildcats into one of the elite programs in college basketball. Wright won national championships in 2016 and 2018 and again has the preseason favorite to win the Big East — a team expected to contend for another national title.

Wright earned the milestone in the latest home opener for Villanova since Dec. 22, 1992, against Vermont. The pandemic wreaked havoc on the schedule and Villanova had home games against Temple, Saint Joseph’s and DePaul canceled or postponed. So the Wildcats hit the road and went 4-1 in Connecticut’s “Bubbleville” and won at Texas and Georgetown.

Gillespie and Jeremiah Robinson-Earl each scored 18 points for the Wildcats (6-1, 2-0 Big East), and Justin Moore had 13.

The Pavilion was empty, and fans might have stayed home anyway in a normal year on a night when a major winter storm dumped several inches of snow on campus.

“It didn’t even seem like our place,” Wright said.

Butler landed safely on Monday night to prepare for just its second game of the season, and first in 21 days after the program paused due to COVID-19 protocols. The 21-day in-season break was believed to be the longest between games in Butler history.

Jair Bolden scored 18 points and helped the Bulldogs (1-1, 0-1 Big East) stay competitive with 3-pointers that kept them within two in the second half.

Like so many games in Wright’s 600-win tenure, the Wildcats found a way to break the game open, in this case a 3-pointer by Cole Swider, Jermaine Samuels slashing his way through the lane for a three-point play and Caleb Daniels hitting a 3 for a 64-53 lead.

Villanova methodically maintained the lead from there — nothing flashy, just smart basketball (six turnovers to Butler’s 15) from an experienced team.

The Wildcats forced a turnover and Gillespie buried a 3 for a 77-63 lead that drew applause from Wright in a sequence that encapsulated all they did right in beating the Bulldogs. Swider hit a 3 for a 19-point advantage, and win No. 600 was soon in the books.

“When you're the coach at Villanova, you're going to win a lot of games,” Wright said.

At just 58 and with a job at Villanova for as long as he wants, Wright is on pace to rack up hundreds more victories and truly stamp himself as one of the college game’s greats.

“He’s the main reason, one of the main reasons I chose Villanova, just because of how he is as a coach,” Gillespie said. “He knows everything about the game.”

Butler: The Bulldogs were picked eighth in the preseason Big East poll and played in spurts like a team that could surprise and finish higher in the standings. They shot 52% in the first half and scored at the horn to trail 41-34 at the break. ... Aaron Thompson, one of 10 semifinalists for the 2019-20 Naismith Men’s Defensive Player of the Year Award, was helped off the court late in the game with an unspecified injury.

Villanova: The Wildcats hit 10 3s and showed they have the talent to again win the Big East. ... The Bulldogs could have 6-foot-5 East Tennessee transfer Bo Hodges in the lineup for the next game after the NCAA’s Division I Council granted blanket waivers for all athletes to play immediately.

Wright went 122-85 with two NCAA Tournament appearances in seven seasons at Hofstra. His first win at Villanova came against Grambling State on Nov 21, 2001.

“We’ve worked closely with Virginia on this,” Wright said. “Both schools tried to make this game happen. Due to COVID-19 issues, we will not be able to play.”

Wright said potential games at MSG fell through and the Wildcats could play a home game instead on Saturday.

The Wildcats are set to play Dec. 23 at Marquette.

Butler is home Saturday against Indiana.