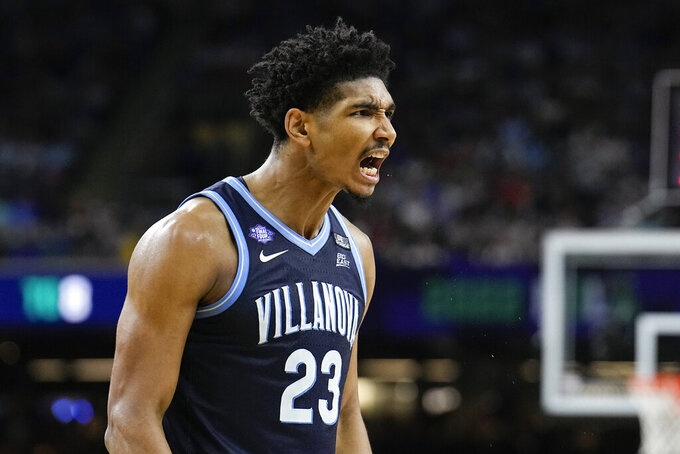 Villanova forward Jermaine Samuels celebrates after scoring against Kansas during the second half of a college basketball game in the semifinal round of the Men's Final Four NCAA tournament, Saturday, April 2, 2022, in New Orleans. (AP Photo/Brynn Anderson)

NEW ORLEANS (AP) — Villanova needed Justin Moore on offense, to add another scoring threat and spread the floor against Kansas' swarming interior defense. The Wildcats could have used him on defense, to rotate out on the Jayhawks' shooters and help dig down into the post.

For all the ways Moore could have helped, it might not have mattered the way Kansas dropped in 3s on Saturday night in the Big Easy.

Villanova fell into a big early hole and under a barrage of 3-pointers all night, losing 81-65 to Kansas in the national semifinals.

“We were ready and we were good enough to win that game,” Villanova coach Jay Wright said. “They did a lot of things that made them win the game.”

Moore flew to New Orleans to support his team, wheeling around a four-wheel scooter crutch after tearing his Achilles tendon in last week's Elite Eight.

The second-seeded Wildcats (30-8) tried a variety of tactics to offset the loss of their second-leading scorer, including zone a few times and a stint of small ball that cut an early 19-point deficit to six in the second half.

The top-seeded Jayhawks (33-6) crushed the ‘Cats' hopes with an avalanche of 3-pointers and David McCormack's inside power game to earn a spot in Monday night’s championship game against No. 8 seed North Carolina.

McCormack bulled his way through the Wildcats for 25 points and Ochai Agbaji went 6 for 7 from beyond the arc to finish with 21 points.

Kansas hit 13 of 24 from 3 and scored 16 more points in the paint, offsetting a solid 3-point shooting night by Villanova. The Wildcats went 13 for 31 from long range, including 5 of 8 by Collin Gillespie, who had 17 points in his final collegiate game.

“We didn’t do some things early on,” Gillespie said. “They got some open looks and they made their open looks, but we felt like we were good enough.”

Kansas and Villanova had done this once before, not that long ago. The Wildcats turned that 2018 Final Four showdown into a beatdown, dropping 18 3s on the Jayhawks in a 95-79 win.

Kansas began this year's version looking as though it would duplicate that game in reverse, using its inside-out game to set up good looks along the perimeter.

Agbaji's fourth 3 came when a Villanova defender hedged into the paint and left him open in the corner. Jalen Wilson threw a skip pass and one of Villanova's former players yelled “No, you can't do that!” as Agbaji's shot arced into the basket.

“The reason they were effective inside with their size was because they got us spread out early with Agbaji hitting 3s,” Wright said. “We weren’t able to get off and help in the post because they attacked us early on the perimeter — and that can become a problem for us.”

Villanova finally got an opening when McCormack went to the bench with just over six minutes left in the first half after picking up his second foul.

The Wildcats took advantage of the lack of bulk inside and Gillespie started hitting shots during a 10-0 run that cut a 19-point deficit to 40-29 at halftime.

Villanova threw the Jayhawks off for a stretch by going small, cutting the lead to seven early in the second half. The Wildcats went on another short run later in the half after Kansas stretched the lead again, pulling within six with six minutes to go.

All the clawing left the Wildcats with nothing left to finish off the comeback.

McCormack powered his way inside for a a pair of thunderous dunks and Kansas continued draining shots from deep. Christian Braun all but put it out of reach with just under three minutes left, heaving in an off-balance 3 at the shot clock buzzer to put Kansas up 75-59.

“I had hit one before that, so I had nothing to lose, honestly,” Braun said. “Just threw one up there and it went in.”

And shoved the Wildcats right out of the bracket.