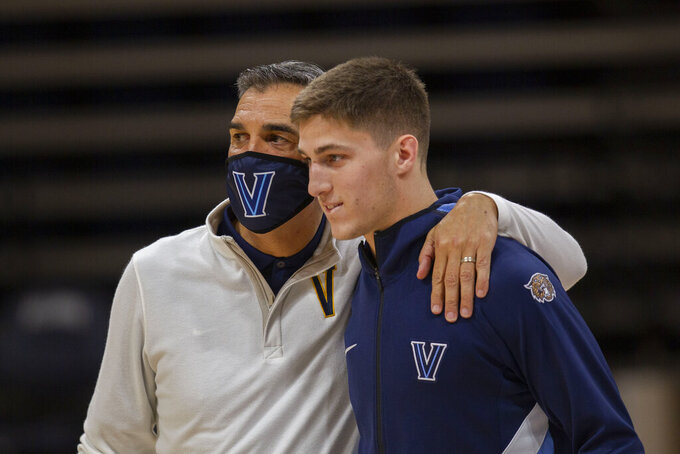 FILE - Villanova head coach Jay Wright, left, and guard Collin Gillespie are shown before an NCAA college basketball game against Creighton in Villanova, Pa., in this Wednesday, March 3, 2021, file photo. Villanova has dominated the Big East over the last decade under the guidance of coach Jay Wright. The fourth-ranked Wildcats were the unanimous choice to win the conference in a preseason coaches poll released Tuesday, Oct. 19, 2021. Villanova is led by guard Collin Gillespie, who was the coaches' pick for preseason player of the year. (AP Photo/Laurence Kesterson, File)

NEW YORK (AP) — Villanova has dominated the Big East over the last decade under the guidance of coach Jay Wright.

The fourth-ranked Wildcats were the unanimous choice to win the conference in a preseason coaches poll released Tuesday. The team, which has won seven of the last eight regular-season titles, received all 10 first-place votes from the league's coaches. Coaches couldn't vote for their own team, and Wright picked No. 24 Connecticut, which was the second choice.

“It's definitely a target on our back," Wright said of the preseason poll spot. “There are new players that are experiencing that. There are freshmen coming in and sophomores that are really doing it for the first time. You have to remember that these guys haven't experienced it before. You have to prove yourself. It's a nice accolade, but it's a challenge.”

Villanova is led by guard Collin Gillespie, who was the coaches' pick for preseason player of the year. He and teammate Jermaine Samuels took advantage of the extra year of eligibility granted by the NCAA due to the coronavirus pandemic.

“This year is going to be a unique year in college basketball because there are a lot of veteran teams,” Wright said. “You'll see a higher brand of basketball early in the season.”

Xavier was the coaches' third choice as the Musketeers return their top seven scorers from last year. St. John's was fourth, with the Red Storm led by Julian Champagnie — the conference's scoring leader — and Posh Alexander, who was the Big East freshman of the year.

Seton Hall rounded out the top half of the conference in the preseason poll. Butler was sixth, followed by Providence, Creighton, Marquette, Georgetown and DePaul.

The Big East has two new coaches, with Shaka Smart taking over at Marquette and Tony Stubblefield leading DePaul.

The Big East held its annual media day in person at Madison Square Garden, the site of its postseason tournament. Last season, because of the coronavirus, the entire preseason discussion was held virtually.

“We were always grateful coming up here to start the season," Wright said. "To be back here again, you think don't take this for granted.”

Commissioner Val Ackerman and Wright were both inducted into the Naismith Memorial Basketball Hall of Fame last month. Ackerman was honored as a contributor to the game for helping found the WNBA, which just finished its 25th season. Wright led Villanova to national championships in 2016 and 2018.