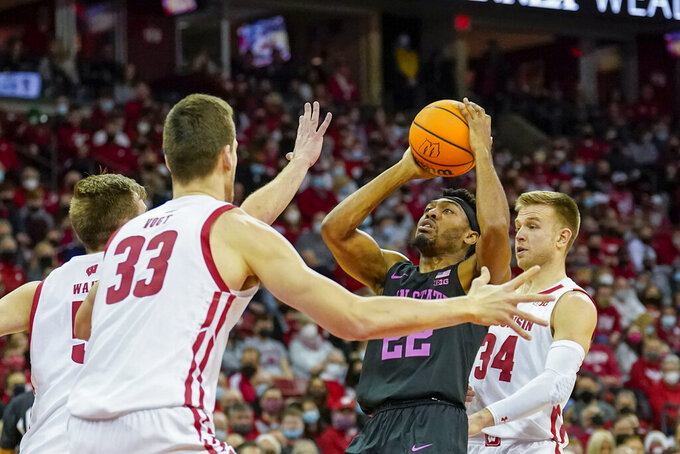 MADISON, Wis. (AP) — Wisconsin proved it can win even when it doesn’t get much offense from national player of the year candidate Johnny Davis or fifth-year senior Brad Davison.

But it sure wasn’t easy.

Tyler Wahl made a tiebreaking layup with 30.5 seconds left as the 11th-ranked Badgers beat Penn State 51-49 on Saturday for their 21st straight home victory in the series.

“It was just a gritty game,” said Wahl, who scored 12 points. “Our shots weren't falling. I thought we were getting decent looks throughout the game. But it was our defense that really stuck us in there.”

Wisconsin (18-4, 9-3 Big Ten) needed other players to step up because Davis and Davison weren't nearly as effective as usual.

“Every time we play a really good player, our goal is more field-goal attempts than points,” Penn State coach Micah Shrewsberry said. “Johnny's an attacker, so he can score off the dribble, he scores in the post, he can go to the glass. Our goal was to not foul him, don't send him to the free-throw line.”

Davison shot 3 of 10, scored nine points and didn’t make his first basket until there was 9:23 left. Both Davis and Davison — who were averaging a combined 36.6 points — went scoreless for the first 26½ minutes.

“As I told (Davis) and Brad in front of everybody in the locker room, ‘Hey, you guys have carried us a lot of nights. Tonight, it was everybody else's turn to try to carry you and help the team, so thank your teammates for helping us when we needed it,'" Wisconsin coach Greg Gard said.

Trailing by nine with less than 3 1/2 minutes left, Penn State went on a 9-0 run and tied the game on Myles Dread's layup with 51 seconds remaining. Wahl’s driving layup put Wisconsin back ahead.

Wisconsin still had two fouls to give and used both of them over the next 24 seconds. With 6.1 seconds left, Penn State’s Jalen Pickett threw an inbounds pass to Dread, who made a move to get free of Wisconsin's Chucky Hepburn momentarily before shooting a deep 3-pointer that bounced off the back rim.

Wahl pulled down the rebound to seal Wisconsin's victory.

“I thought it was going in,” Hepburn said. “I was holding my head down. But it didn't, so I was walking off with a smile.”

Steven Crowl had 13 points and a career-high five assists for Wisconsin, which also got 10 points from Hepburn. Sam Sessoms scored 14 to lead the Nittany Lions.

A delay in the arrival of the team's charter plane meant Penn State couldn’t leave State College, Pennsylvania, until Saturday at 1:45 p.m. EST. The Nittany Lions landed in Madison at 2:30 CST, about 2½ hours before the scheduled tipoff.

“We're not using our travel as an excuse,” Shrewsberry said. “They beat us. They played great defense and did what they needed to do."

Penn State missed 19 of its first 20 shots and scored just three points in the first 12:57. Penn State had a scoring drought that lasted nearly 10½ minutes.

Penn State: The Nittany Lions' travel issues this weekend capped a tough stretch in which they've rarely played at home. Penn State has played four of its last five games on the road and has played just one home game – a 90-86 double-overtime triumph against Iowa on Monday – over the last 3½ weeks. Penn State does play five of its next seven games at home.

Wisconsin: The Badgers improved to 11-1 in games decided by six points or fewer, but their lack of offense is concerning. Wisconsin has shot 9 of 45 from 3-point range over its last two games.

After losing at Illinois and struggling to beat Penn State this week, Wisconsin figures to drop a few spots in Monday's Top 25.

Penn State’s uniforms Saturday were black and pink, the school’s original colors back in the 1880s. Penn State switched to blue and white in 1890.

Wisconsin: At No. 13 Michigan State on Tuesday.