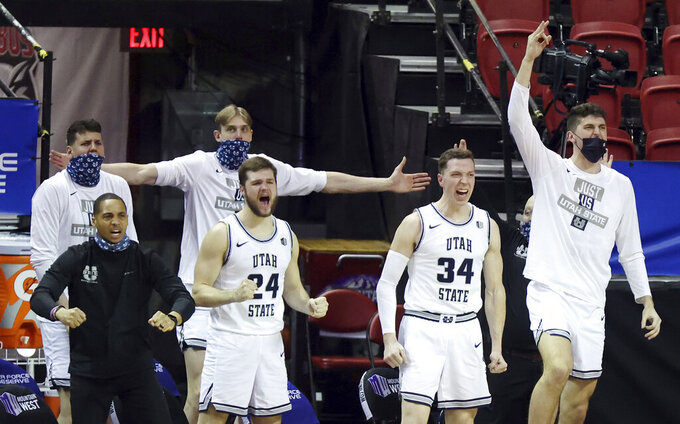 The Utah State bench reacts during the second half of an NCAA college basketball game against Colorado State in the semifinal round of the Mountain West Conference men's tournament Friday, March 12, 2021, in Las Vegas. (AP Photo/Isaac Brekken)

“We did it the hard way,” Kelsey said.

Kelsey and the Eagles won the Big South Conference tournament in 2020 and were among a dozen teams that earned bids and were eagerly awaiting their chance to play. Instead, the start of the coronavirus pandemic robbed those teams of that opportunity — leaving them a full year to dream, scheme and hope for another opportunity.

Just four schools — Gonzaga, Liberty, Utah State and the Eagles — from that group of 12 reached this year's field of 68.

“To have the disappointment that we had a year ago and to not be deterred, to have the type of focus, determination and approach they had since they got out of quarantine," Kelsey said Tuesday. “This is a very driven team.”

The Bulldogs, who've built themselves into a modern day, college basketball powerhouse, are the tournament's No. 1 overall seed and, at 26-0, are seeking to become the sport's first undefeated champion since Indiana did it in 1976.

There was little chance Gonzaga would've missed this year's Big Dance even if it hadn't won the Western Coast Conference tournament crown again.

Not so for the other three.

“Nothing is a given,” Utah State forward Justin Bean said.

And fewer prospects after the Aggies started their season losing three of their first four games. Instead, the team called on the bonds forged in winning Mountain West Conference Tournament titles in 2019 and 2020.

Utah State rolled off win streaks of 11 and six games following the slow start. The road back hit a speedbump when the Aggies lost to top seed San Diego State in the championship game, and Bean said there were a few moments of worry Sunday wondering if they'd see their name called. But there were the Aggies, seeded 11th and facing No. 6 seed Texas Tech on Friday.

Liberty also earned its berth with a third consecutive Atlantic Sun Conference Tournament title in as many years in the league. The regrets of a season ago, Flames coach Ritchie McKay said, didn't keep this group from pointing toward its next opportunity to play in the NCAA Tournament.

McKay got an early glimpse of that resolve when the Flames defeated a pair of Southeastern Conference teams in Mississippi State and South Carolina back-to-back in late November.

“I think we have a sense of confidence that is reflective of how hard they've worked and how united they are,” said McKay, whose 13th-seeded team faces Oklahoma State on Friday.

Darius McGhee, the Atlantic Sun player of the year, said Liberty has used last year's loss of its tournament trip as inspiration this time around: “There's a lot of motivation. Guys are super excited to see how far we can go.”

Winthrop believes the same thing. Kelsey, the team's ninth-year coach, could see this past spring that players weren't hanging their heads about what they lost, but looking forward to what was possible.

The Eagles won their first 16 games before falling, 57-55, to UNC Asheville on Jan. 29. Winthrop ran off seven straight wins heading into the NCAAs, including an 80-53 victory over Campbell for the Big South Tournament crown.

The Eagles' Chandler Vaudrin, a 6-foot-7 point guard who leads the NCAA with three triple-doubles, believes his team's latest run was fueled as much by their lone loss as all their victories. “That loss, I think, really propelled us in the second half of the year to continue to grow and continue to play good basketball”

“Now, we're at the same place” as last year, Vaudrin said. “We did what we needed to do.”