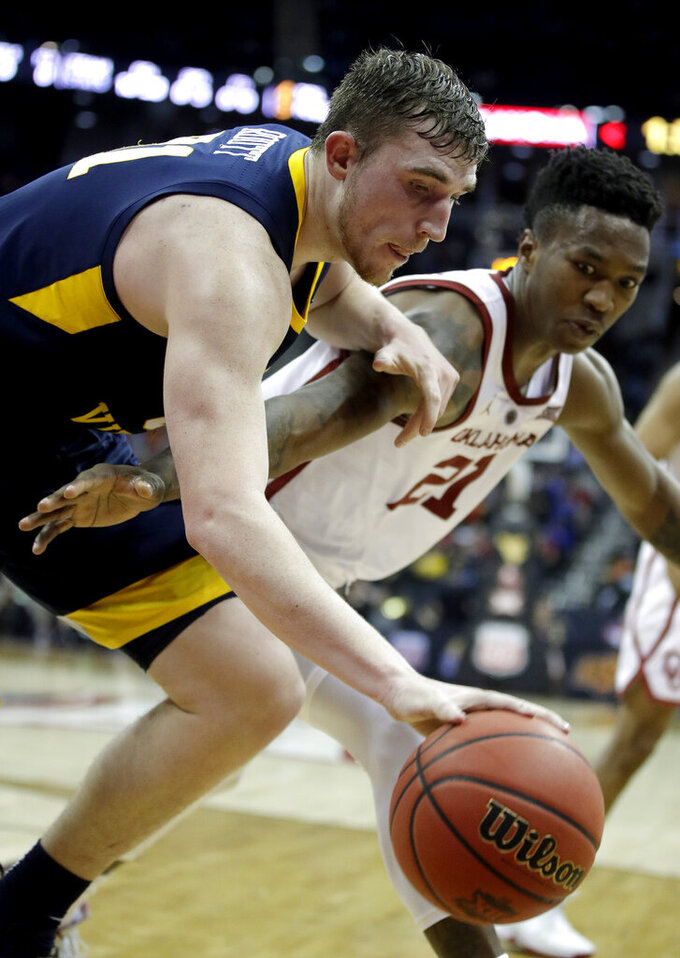 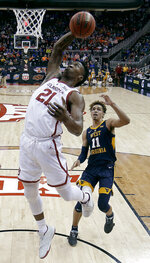 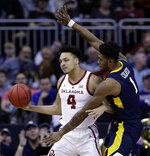 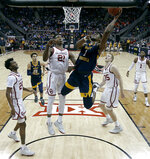 KANSAS CITY, Mo. (AP) — Jermaine Haley thought West Virginia was only up two when Oklahoma's Christian James knocked down what appeared to be a buzzer-beating 3-pointer in the first round of the Big 12 Tournament.

Turns out the Mountaineers were up by three.

And that 3-pointer that would have forced overtime? James' foot was on the line, and a brief but tense review by the officials at the courtside monitors ensured they got the call right.

The No. 10 seed Mountaineers escaped with a 72-71 victory Wednesday night.

"I was on the ground thinking we lost," Haley said. "Luck was on our side, I guess."

Lamont West had 15 points, Haley finished with 14 and Jordan McCabe had 12 for the Mountaineers (13-19), who advanced to the quarterfinal round and a date with No. 2 seed Texas Tech.

Regardless of what happens Thursday, the victory over the seventh-seeded Sooners was uplifting for a team that has been through a lot. Two starters have been kicked off the squad, another announced his plans to transfer, and rim protector Sagaba Konate hasn't played in months because of injury.

None of which seemed to matter much Wednesday night.

"It feels good any time you win," Mountaineers coach Bob Huggins said. "When you've done this as long as I have, winning is kind of a relief. Losing is like a near-death experience. So I'm relieved."

Brady Manek had 22 points and Kristian Doolittle had 18 for the Sooners, who are now poised to give the NCAA Tournament selection committee an intriguing test case on Sunday.

They have four quadrant-1 wins and a strong resume against quality opponents, but they are also just 19-13 overall and went 7-11 in the league. And with a loss to the Mountaineers, they won't have an opportunity to add to their win total in Kansas City.

The Mountaineers, who have played in the past three title games, raced to an early lead against the Sooners, only to watch coach Lon Kruger's team slowly claw back into the game.

They did it old-school, too. Oklahoma hit just one 3-pointer — James' in the closing seconds for a 35-33 halftime advantage — and never made it to the foul line. Instead, the Sooners kept getting open looks in the middle of the Mountaineers defense for layups and short jumpers.

Manek hit a couple of quick 3-pointers out of the locker room to extend the lead, but McCabe soon caught fire. He drained four of them in quick succession as West Virginia pulled ahead.

Oklahoma kept it close the rest of the way, and Doolittle's two free throws pulled the Sooners within 70-69 with 2:10 to go. But Derek Culver's putback with just over a minute left extended West Virginia's lead to 72-69, and Doolittle missed everything at the other end for Oklahoma.

It set up a dramatic final minute that ultimately sent the Mountaineers into the next round.

"We've been talking about it since midseason, where we were in the standings," McCabe said. "The only way to make the postseason, the NCAA Tournament, is this tournament right here.

"We knew we had nothing to lose."

The Sooners lost center Jamuni McNeace with 12 1/2 minutes left when he appeared to hurt his right ankle on a scrum under the bucket. McNeace had to be helped off the floor without putting any weight on his leg. He was scoreless with two rebounds.

West Virginia is still alive, at least for another day. The Mountaineers get the hottest team in the tournament — maybe the nation — in coach Chris Beard's Red Raiders.

Oklahoma has a long wait until Selection Sunday. The Sooners beat West Virginia a couple weeks ago, and a win over Kansas down the stretch also helps. "The parameters are that all 30 games count the same. It doesn't matter whether they're conference or non-conference," Kruger said. "Our guys won a lot of ballgames, but we'd have liked to win a couple more."