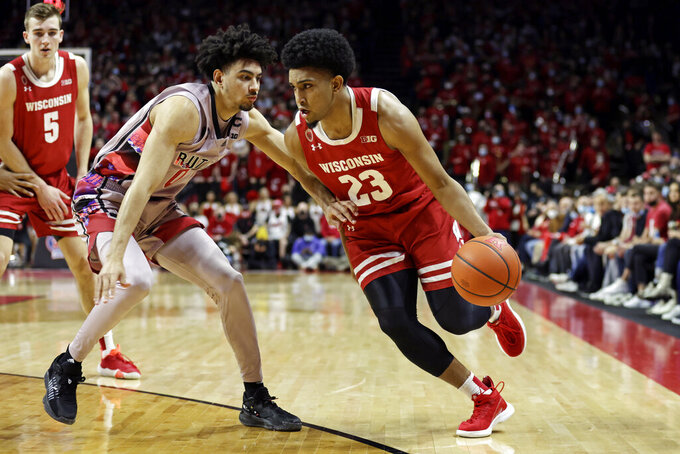 MADISON, Wis. (AP) — Wisconsin showed its confidence in Chucky Hepburn months ago by making him the Badgers' first true freshman in two decades to start a season opener.

Hepburn has been rewarding that faith ever since.

The 6-foot-2 point guard delivered one of the biggest shots in recent program history Tuesday to help the 10th-ranked Badgers beat No. 8 Purdue 70-67 and wrap up a share of the Big Ten title. Wisconsin (24-5, 15-4) can win the championship outright Sunday by beating Nebraska (9-21, 3-16).

“It would mean everything,” Hepburn said.

Hepburn explains that a Big Ten title would have importance that goes beyond what it would do for Wisconsin’s program. Hepburn has been using this season to honor his close friend, 20-year-old Vincent Burns, who died in January.

“I want to do everything I can to compete for him,” said Hepburn, who was so close to Burns that he refers to him as a brother. “It’s on my mind every day. He’s never left my head.”

Burns was fatally shot outside a bar in Omaha, Nebraska. Hepburn returned to his home state less than a week later and scored 13 points in a 73-65 victory over Nebraska before heading to his friend’s funeral.

Hepburn arguably has played his best basketball in the six weeks since.

“Honestly, we didn’t know if he’d be able to continue playing for the next couple of weeks,” assistant coach Dean Oliver said. “You never know how long it’s going to take to deal with something like that. He’s just an unbelievably tough kid.”

Hepburn's toughness was apparent to the Badgers long before then.

Head coach Greg Gard cites Hepburn’s moxie, maturity, court vision and feel for the game while explaining the decision to make him the first Wisconsin true freshman to start a season opener since 2001. The last freshman to do it was Devin Harris, who went on to play 15 seasons in the NBA.

“I told him in July,” Gard said. “I said, ‘Are you ready for this? Because I’m going to hand you the keys if you keep going and doing what you’re doing.’ That’s probably the first time in a long time I’ve made up my mind on who I felt should be starting that early, just because of what I saw every day and how important that position is for us.”

Those traits also have caught the attention of Big Ten rivals.

“He’s a confident kid,” Purdue coach Matt Painter said. “He’s a strong, sturdy lead guard. He plays hard. He scraps. He gets his hands on a lot of balls.”

Hepburn scored a career-high 17 points Tuesday against Purdue and capped the performance by banking in a tiebreaking 3-pointer from in front of the Wisconsin bench with 1.5 seconds left.

That winning basket looked rather familiar to Doug Woodard, who coached him at Bellevue (Nebraska) West High School. Woodard recalled how Hepburn also banked in a 3-pointer to beat Creighton Prep during a high school career that included three state championship game appearances and one title.

“It was almost to the same angle, but on the opposite side,” Woodard said.

Woodard was so struck by the similarity that he pointed it out in a text message to Hepburn. Woodard said Hepburn responded by texting back a series of smiley faces.

“I’m not sure Chucky meant to bank it in, but to me, the thing is that he’s willing to take that shot,” Woodard said. “He finds a way in big moments to get things done.”

That shot catapulted Hepburn to the spotlight, but it’s his ability to do the dirty work that earned him the respect of his teammates and coaches.

“I feel like I’ve played decently, not the best I could,” Hepburn said.

But he avoids turnovers – he has totaled only four while playing 174 minutes during Wisconsin’s five-game winning streak – and plays tenacious defense.

“From the first day of practice or first open gym, he guarded me the whole time and was up in my shorts,” junior forward Tyler Wahl said. “I was like, ‘This kid wants it. He’s going to be good.’ “

Now his offense is catching up to his defense. That much became apparent against Purdue as he captivated a raucous home crowd that couldn’t wait to thank him.

“I’m walking around campus and people are taking pictures with me, telling me, ‘Good shot,’ “ Hepburn said. “That’s the type of support I love, why I picked Wisconsin. There’s no better fan base than Wisconsin.”

Hepburn wants to continue delighting them for the next month or so.