Lloyd looking to get Arizona back on track in first year 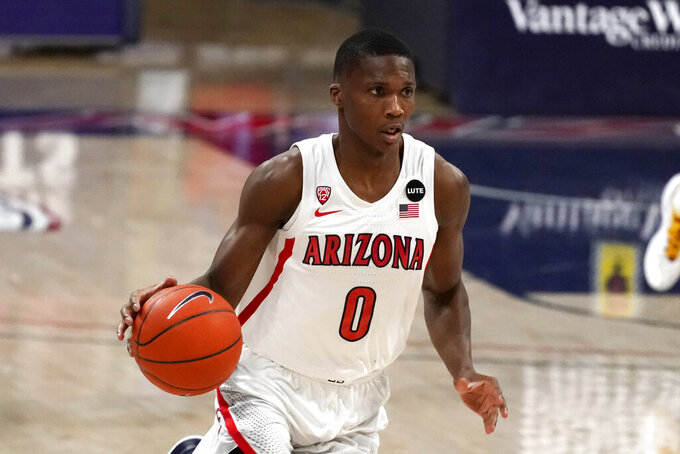 FILE - In this Jan. 7, 2021, file photo, Arizona guard Bennedict Mathurin brings the ball up during the first half of the team's NCAA college basketball game against Southern California in Tucson, Ariz. Mathurin is one of several key returning players who should help ease Tommy Lloyd’s transition to head coach for the first time. Mathurin averaged 10.8 points as a freshman last season. (AP Photo/Rick Scuteri, File)

Lloyd's task in his first season as a head coach will be to return Arizona to a place among the nation's elite.

The turnaround may not take long.

“When you’re part of a program like Arizona you’re always going to have expectations, so I think the best thing you have to do is embrace them and then you have to wrap your arms around all the reasons there are expectations,” Lloyd said. “It’s a great place to coach and play basketball so you should have good players.”

Lloyd was Few's righthand man during a two-decade run at Gonzaga that saw the Zags reach the NCAA Tournament every year, the Sweet 16 four times and the national championship game twice, including last season.

Arizona lured Lloyd away from Spokane, Washington, to replace Sean Miller, who was fired after 11 seasons amid an NCAA investigation into improper recruiting.

While the Wildcats are awaiting potential sanctions, Lloyd will try to get them back to the NCAA Tournament for the first time since 2018. Arizona missed the tournament in 2019, March Madness was canceled last year and the Wildcats served out a self-imposed postseason ban during the tournament last spring.

Arizona lost four of its top six scorers from that team, but Lloyd has built a sturdy roster filled with returning players, quality transfers and freshmen who could have an immediate impact.

“I’m looking forward to us being really competitive, and I think we should be a team competing to win games in the NCAA Tournament,” Lloyd said.

Lloyd got a big boost when Estonian point guard Kerr Kriisa opted to return after briefly entering the transfer portal. The 6-3 freshman mostly played shooting guard after becoming eligible late last season but will be back to his natural position at the point under Lloyd.

“Before last year, I had never played at the two guard,” Kriisa said. “I have been a point guard all my life and I don’t know who took that narrative. It’s really weird. I think if you watch my film enough, you will know I was always a point guard.”

Bennedict Mathurin showed flashes of brilliance last season while averaging 10.8 points per game as a freshman. The 6-foot-7 Canadian is one of the Pac-12's most athletic players and will be expected to take on a much bigger role this year.

Lithuanian big man Azoulas Tubelis is a crafty player who can play inside or out. The 6-11 forward averaged 12.2 points and 7.1 rebounds last season. Christian Koloko, a 7-1 sophomore, has been a superb shot blocker since arriving in Tucson and made big strides offensively last season.

Lloyd lured a familiar face to the desert, adding Gonzaga transfer Oumar Ballo to what will be a big frontcourt.

The 7-footer from Mali was a top-100 recruit in 2019 but was mostly buried on the bench with Gonzaga's talented roster. He could blossom with more playing time at Arizona.

Pelle Larsson, a 6-5 Swedish guard, shot 46% from 3-point range while averaging 8.2 points with Utah last season. Senior guard Justin Kier is also a good outside shooter and brings plenty of experience after playing four seasons at George Mason and last year at Georgia.

Arizona starts the season with the usual mix of home games against smaller-conference programs, but has some potentially tough games before the full Pac-12 season starts.

The Wildcats play Wichita State in Las Vegas in late November, with a possible matchup against No. 6 Michigan the next day. After two conference games in early December, Arizona will play road games against No. 11 Illinois and No. 18 Tennessee before kicking off the rest of the Pac-12 season against No. 2 UCLA on Dec. 30.