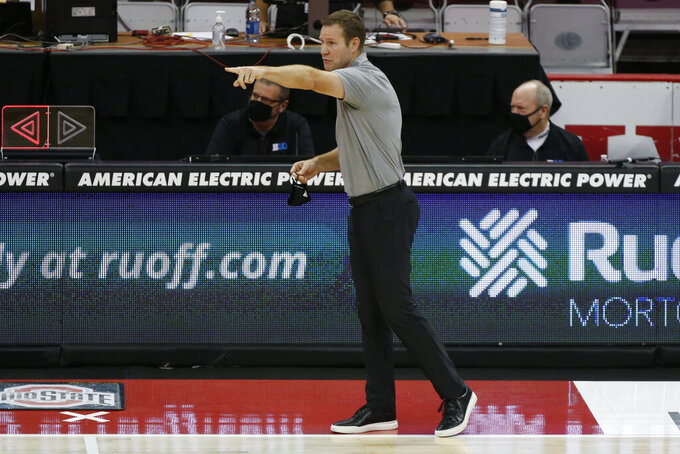 Nebraska coach Fred Hoiberg instructs the team during the first half of an NCAA college basketball game against Ohio State on Wednesday, Dec. 30, 2020, in Columbus, Ohio. (AP Photo/Jay LaPrete)

So far that sizes up Fred Hoiberg’s second year at Nebraska, where he is trying to turn around a program with a long history of losing.

The Cornhuskers (4-6, 0-3) have dropped 20 straight games against Big Ten opponents, and their 36-point defeat at Ohio State on Wednesday was the most lopsided in Hoiberg’s 213 games over six-plus seasons as a college coach.

Nebraska’s conference losing streak is the longest among Power Five programs and third-longest in Division I behind Chicago State (42) and The Citadel (22).

“Mentally, I think it’s wearing on them more individually, on what they can do to take the lid off that hoop,” Hoiberg said. "They’ve put in the time. I told a couple of them they’re putting too much time in. They’re coming in for two hours every night and getting up shots and trying to do everything they can to get that feel where you go out in a game and you can knock some down.

“It’s just unfortunate we can’t throw that thing in the ocean right now.”

Hoiberg's hiring in March 2019 was supposed to signal a new era for a program that hasn't won a conference championship since 1950 and remains the only one in a Power Five league to never win an NCAA Tournament game.

Hoiberg, who was out of work nearly five months after getting fired by the Chicago Bulls, signed a seven-year contract worth $25 million, and athletic director Bill Moos declared the school “all in” with basketball.

Hoiberg achieved cult status as a player at Iowa State — he was known as “The Mayor” in his hometown of Ames — and was celebrated for his fast work building a winner as coach of the Cyclones.

At Nebraska, he's following the same plan he used at Iowa State, where he made liberal use of transfers and reached the NCAA Tournament in his second year (2012).

Making headway at Nebraska promises to be difficult, largely because the Big Ten is the toughest conference in the country with nine teams in this week's Top 25.

Only two players on the current roster suited up for Hoiberg’s first Nebraska team, which lost 17 in a row to end a 7-25 season.

The Huskers have averaged 58.7 points while opening Big Ten play with losses to Wisconsin, Michigan and Ohio State. In an offense that's supposed to be free flowing and dependent on perimeter play, the Huskers are shooting 30% on 3-pointers and 41% overall and averaging 12.9 assists — all Big Ten lows.

Teddy Allen, who transferred from Western Nebraska Community College after stops at West Virginia and Wichita State, is scoring better than 17 points per game but has had uneven performances.

Dalano Banton, an unconventional point guard at 6-foot-9, is scoring 13 per game but disappeared on the offensive end against Ohio State. Lat Mayen, recruited as a 3-point specialist, is shooting just 25% from distance. Yvan Ouedraogo, the primary big man, has struggled to finish scoring opportunities.

Though fans might think otherwise, Ouedraogo said he doesn't see a repeat of last season.

“I think people really care more about winning this year, people are working more in the gym, so I don’t think it’s the same thing as last year,” he said. “We need a win, starting winning, just to start believing in ourselves and seeing we can do it. I feel we have a good group. Once we figure that out, it’s going to be good.”

Still, it's going on one calendar year since Nebraska beat Iowa for its most recent win in a Big Ten game. The Huskers' next opportunity comes Saturday at home against No. 17 Michigan State (6-3, 0-3), which also is desperate for a win after losing three straight to open Big Ten play for the first time since 2001-02.

“My faith is high in this group and it always will be however many games we win this year because they work and they love to play and they love to compete and they love to be in the gym,” Hoiberg said. “That's where it starts as a competitor, when you go in there and you take it personal and you do everything you can to pull yourself out of it. I see a group that wants to get things turned around.”