At 70, Hurricanes' Larranaga says he has no plans to retire 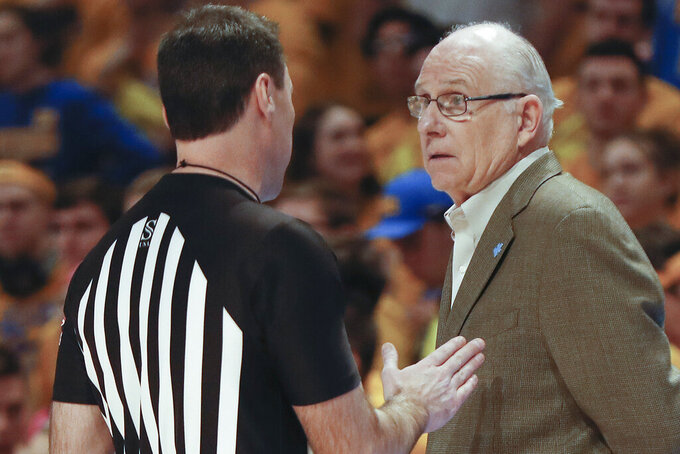 Miami head coach Jim Larrañaga, right, talks with an official during the first half of an NCAA college basketball game against Pittsburgh, Sunday, Feb. 2, 2020, in Pittsburgh. (AP Photo/Keith Srakocic)

CORAL GABLES, Fla. (AP) — Nearing the end of his 34th season as a college coach, the Miami Hurricanes' Jim Larranaga has no plans to quit anytime soon — or ever.

The Hurricanes begin the final week of the regular season with a 14-14 record, leaving Larranaga in danger of back-to-back losing seasons for the first time since 1991-93 at Bowling Green. But he believes the Miami program is on the verge of a turnaround, and he expects to be part of it.

“I love coaching,” the 70-year-old Larranaga said Monday. “Honestly, I can't see myself doing anything else. I have no interest in ever retiring. I don’t know what the heck I would do. I know my wife would not like it.”

Larranaga is under contract through 2023-24. He has coached four NCAA Tournament teams in his nine seasons at Miami, but the Hurricanes went 14-18 a year ago — his first losing record since 1997-98 at Bowling Green.

This season Miami is 14-14 overall and 6-12 in the Atlantic Coast Conference, with games remaining at home against Virginia on Wednesday and Syracuse on Saturday.

Larranaga has been slowed of late by back trouble, which forced him to miss a game in December. But his seniors weren't surprised to hear he plans to keep coaching.

“Coach L thinks he’s 30,” guard DJ Vasiljevic said. “He just loves doing what he does. The last two seasons haven’t gone as planned, but he’s the type of guy who comes to work every day happy.”

Larranaga blames the Hurricanes' recent mediocrity on an FBI investigation into college basketball that raised questions about his program. One Miami player was ruled ineligible by the NCAA because of dealings with an agent, but no wrongdoing by Larranaga surfaced.

“These past two seasons were in my opinion a direct result of the FBI investigation,” Larranaga said. “It impacted our recruiting dramatically and has left us shorthanded, to the point we don’t really have a sophomore class. And that makes a big difference.”

Larranaga said next season's freshman class looks promising. With two scholarships still available, spring recruiting will determine how much better the Hurricanes are next season — and how quickly Larranaga climbs the list of coaches with the most career victories.

He ranks 33rd with 631 and counting. But he said the job is about more than wins and losses.