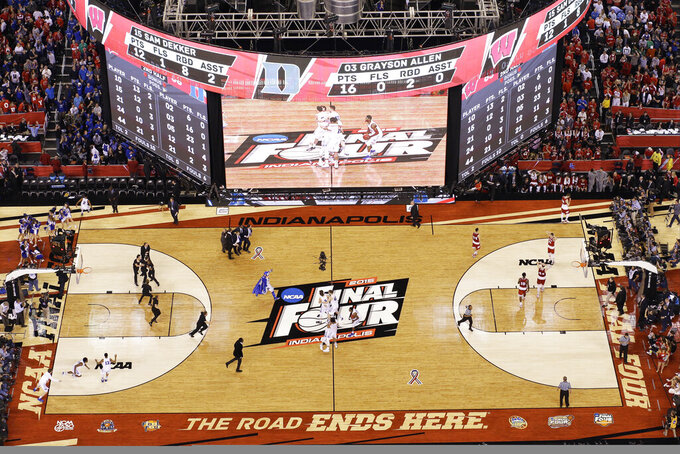 There aren't many chances to say a sports rights deal works out for networks, the organization and fans. But the CBS/Turner partnership in airing the NCAA Men's Basketball Tournament certainly does.

This is the 10th year that CBS and Turner have teamed up for March Madness. While the deal provides the NCAA with its largest source of revenue, it has also turned a profit for both networks as well as benefiting fans because all of the games are available nationally.

The success of the partnership, which will last until at least 2032, has exceeded the expectations of CBS Sports chairman Sean McManus.

“Quite frankly no one knew what the relationship was going to be. There was a lot of skepticism, how could each with its own set of clients do it,” McManus said. “With the production capabilities. I was confident and (former Turner Sports chairman) David Levy was confident. We didn’t know though until we put it on the air.”

CBS has been carrying the tournament since 1982, when it shared the first two weeks with ESPN. It took over the entire package in 1991, but by 2010 it was losing close to $50 million a year on televising the tournament. Unless viewers had DirecTV and paid extra for the Mega March Madness package, they were at the mercy of their CBS affiliate over which games they would see.

But since 2011, one of the most-asked questions during the first week of the tournament is “what is the channel number for truTV?” The network airs the First Four and first two rounds along with CBS, TBS and TNT. Each game also has a scoreboard of the other games and what channels they are on, making channel surfing a breeze during close games or time outs.

McManus said some fans weren't happy at first to see their games on TBS or TNT, but that most quickly loved being able to have access to all the games.

“The tournament outgrew one network and the costs were high. CBS needed cable TV to contribute, which was a very smart move in doing,” said Marc Ganis, the co-founder of Chicago-based consulting group Sportscorp. “This is an important property for CBS and Turner to own and control. It’s expensive but beneficial for everyone.”

The original 14-year deal in 2010 was also ahead of its time because it gave multimedia and streaming rights to both networks, as well as Turner taking over the operation of the NCAA's website. It also granted CBS and Turner the marketing rights to all NCAA championships.

The ad sales not only include the broadcasts on linear channels, but also on the “March Madness Live” app, which is operated by Turner.

“Part of the reason the contract has increased in value is because they have broad rights. It planned for the future with the cord cutting taking place and has created a long-term property that is must-see. The only other one that is similar is the NFL,” Ganis said.

John Bogusz, CBS' Executive Vice President of Sports Sales and Marketing, said last week that only a couple of ad spots are available for the entire three weeks. He also pointed out that 90% of advertisers have returned from last year. In 2020, sales were sold out going into the tournament before it was the first major event cancelled due to the coronavirus pandemic.

It is expected that this year's event will surpass the $910 million in spending by advertisers two years ago. According to the NCAA's most recent audited financial statement, CBS and Turner are paying a combined $850 million to carry this year's tournament. That might be considered a bargain considering that CBS' current deal with the NFL averages $1 billion per season through 2022.

CBS and Turner's original contract with the NCAA was for 14 years at $10.8 billion (average $770 million per year). They signed an eight-year extension in 2016 that gives them the rights through 2032. The per year average will jump to $1.1 billion beginning in 2025,

The partnership has also been seamless for the announcers. TNT's Kenny Smith, along with the rest of the “Inside the NBA” crew have been able to adapt to doing the tournament. Normally they are in New York the first two weeks, but they will remain at Turner's studio in Atlanta this year.

“The only thing that was the difficulty initially was probably, you know, doing NBA games you only knew the top 20 teams in basketball in college basketball. You didn’t know, the St. Bonaventure's or San Diego states when they weren’t in the top 20 and kind of making their way up,” he said. “But now it’s pretty seamless, when you come in. We leave heavy on Clark (Kellogg) because he’s gonna fill in a lot of gaps that we don’t know. But now instead of top 20, I’m probably top 40.”

With this year's tournament taking place in Indiana and longtime stalwarts Kentucky and Duke not in this year's field, there are some concerns if the ratings will measure up to past years. McManus and others though think the pent-up demand after last year's event was canceled will make it a must-see event.

“There are going to be plenty of storylines over the next couple weeks,” said Tag Garson, Wasserman’s senior vice president of properties. “I will be curious this year to see how they showcase and produce stories around the student-athletes not as well known as when they watched in the past.”