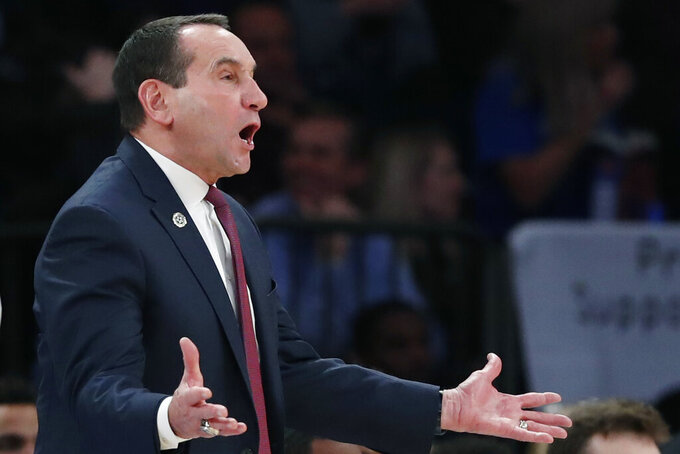 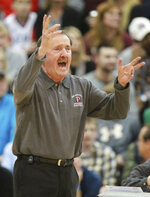 NEW YORK (AP) — Herb Magee is the "Shot Doctor," who has worked with kids to the pros on the art of the jumper, while quietly crafting a Hall of Fame coaching career at a Division II program nestled outside Philly's college hoops epicenter.

Mike Krzyzewski is simply "Coach K," an NCAA national champion, a national team coach and about the gold standard when it comes to building a perennial Final Four contender as he has for 40 seasons at Duke.

Magee and Krzyzewski basketball worlds seem a universe apart, from the suits Coach K wears to the sweats that are on brand for Magee. The salaries, facilities, revenue and headlines generated by each program are akin to a World Series champion and its rookie ball affiliate. Separated by just 103 miles this week, there was a commonality that linked the coaches: Magee joined Krzyzewski as the only NCAA men's coaches to win 1,100 basketball games.

Krzyzewski has 1,138 wins (1,065 with Duke) in a career that started with Army in 1975, and added two more victories to the total when he led No. 1 Duke to the 2K Empire Classic championship in front of nearly 20,000 fans at Madison Square Garden.

"It means a lot because it's just me and coach Krzyzewski. That's it," Magee said. "I've been used to that, ever since we went over 1,000 wins. It's always been just Mike Krzyzewski and Herb Magee."

Magee, meanwhile, is a bit more anonymous coaching in a city where he jokes the media only comes around when he's nearing another victory milestone. The 78-year-old Magee has spent decades putting the Division II school on the basketball landscape as he passed one Hall of Fame coach after another on his way up the record book. Magee has spent his entire career at the same school, even though it might be hard to tell on his bio sheet: Jefferson U churns through names at the rate some stadiums swap naming rights deals. The private school has been Philadelphia University and Philadelphia Textile, and now Jefferson since 2017. The one constant, Magee racking up 20-win seasons and leading the Rams to the NCAA Tournament.

"I was watching Fox News the other day and the fellow said that he didn't even know Philadelphia University was now Jefferson University," Magee said. "So to get that word out there, and it's been like three or four years, I hope that's part of my job. It's an awful lot of name changes since I've started."

Magee ended his playing career at Philadelphia Textile as the school's career leading scorer with 2,235 points. He averaged 29.1 points one season and was a two-time small-college All-America selection. The Boston Celtics drafted Magee with the 62nd pick of the 1963 draft.

Magee passed on signing with Boston because he broke two fingers on his left hand that summer, a big blow for a shooter, and he felt he couldn't crack a Celtics roster that was stocked with future Hall of Famers.

He served as an assistant until 1967 when he took over as head coach and won 21 games. Magee reached the pinnacle in 1970 when the Rams won his only national championship. The Rams won 28 straight games that season and beat Tennessee State in the title game.

Magee never did more than flirt with the idea of leaving for a big college program or an NBA assistant job — he said he's passed up offers to coach on all levels — but he made his mark as the Shot Doctor.

He used to watch the Philadelphia Warriors at Convention Hall and would emulate the top shooters of the time, like Bob Cousy or Paul Arizin. But Magee has no idea who first dubbed him a shot doc.

"I've been teaching shooting since I started coaching," Magee said. "I'm a good shooter, I can talk to the kids about shooting. I've never lectured at a camp or a clinic or any place where it hasn't been about shooting."

The 72-year-old Krzyzewski once invited Magee on his radio show and they talked, well, shooting.

"I know of him," Krzyzewski said at the Garden. "But I'm not a big stat guy. My wife will tell you, I'm going to go watch tape and figure out what the next thing is. All those other things take care of themselves."

Magee and his wife talk each offseason about retirement, and each year Magee is back for the start of another season. Retirement is on hold, and the only worry is Saturday’s game.

"Right now, I don't even think about that," Magee said. "I just worry about the next game. But I can tell you right now, the way my wife and I have been talking, we're going to be coaching next year."