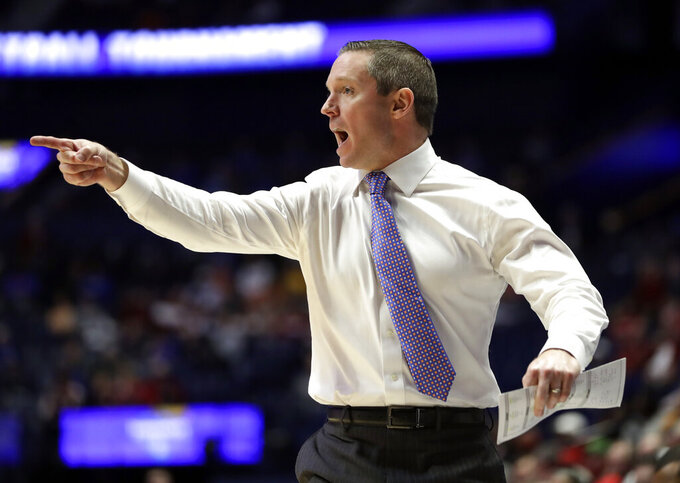 Florida head coach Mike White yells to his players in the first half of an NCAA college basketball game against Arkansas at the Southeastern Conference tournament Thursday, March 14, 2019, in Nashville, Tenn. (AP Photo/Mark Humphrey) 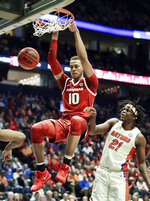 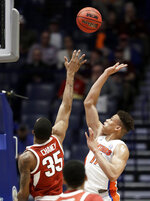 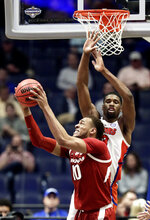 NASHVILLE, Tenn. (AP) — Florida ended its slump just in time to rescue its hopes of making the NCAA Tournament.

Keyontae Johnson scored a career-high 20 points and pulled down 12 rebounds Thursday as No. 8 seed Florida snapped a three-game skid by defeating No. 9 seed Arkansas 66-50 in the Southeastern Conference Tournament.

"It was a must win to get there," said Florida's KeVaughn Allen, who scored 17 points. "We were thinking win or go home."

Florida's victory boosted its postseason profile, but the Gators (18-14) can make an even bigger statement Friday by upsetting No. 9 LSU (26-5) in the SEC quarterfinals.

"I feel like we still have more to go," Johnson said. "We still have to get more big wins to prove our point."

Florida took the lead for good with just over 18 minutes remaining and stayed ahead thanks to its defense. Arkansas (17-15) failed to make a basket in the game's final 7 minutes, 54 seconds.

"I feel like we could have got anything that we wanted," said Arkansas' Daniel Gafford, who led the Razorbacks with 15 points. "We couldn't execute. We shot ourselves in the foot down the stretch."

Arkansas and Florida entered the tournament heading in opposite directions, though only the slumping Gators had a realistic shot at an NCAA Tournament at-large bid. At the start of the day, Florida was 33rd and Arkansas 63rd in the NET rankings, which have replaced the RPI as a criterion for the NCAA Tournament selection committee.

Arkansas had followed up a six-game losing streak by winning its last three regular-season contests to go back above .500. Florida had won five straight in late February before ending the regular season with three consecutive losses.

Florida turned things around Thursday in part because leading scorer Allen broke out of his personal slump.

Allen had scored a total of 18 points in his last four regular-season games, but the graduate of North Little Rock (Arkansas) High School scored 17 points Thursday against his home-state school.

Florida was clinging to a 47-44 lead when Allen took a 3-point shot that bounced off the rim multiple times before falling through with 7:26 remaining. That 3-point shot started a 17-4 run that helped Florida seal the victory.

"He got a couple for him to go early, and you could see in his body language, his confidence level increased a little bit," Florida coach Mike White said. "Down the stretch, we rode him."

Arkansas: The Razorbacks were unable to do anything against Florida's defense again. Arkansas' 50 points Thursday represented a season low. The Razorbacks' lowest point total during the regular season came in a 57-51 loss to Florida on Jan. 9.

"Very disappointed in our performance," Arkansas coach Mike Anderson said. "(We'd) been playing some pretty good basketball. To come on this stage and not play as well we've been playing is kind of disappointing."

Florida: Allen's recovery from his late-season slump gives Florida plenty of reason for encouragement. The Gators' hopes of beating LSU could depnd on whether second-leading scorer Noah Locke can bounce back after shooting 1 of 9 against Arkansas.

Johnson had gone scoreless in Florida's regular-season victory at Arkansas. He had arguably the best performance of his career in the rematch.

His 20 points shattered his previous career high of 15, set three times during the regular season. His 12 rebounds were just one off his career high.

"Bottom line is they played a lot more aggressive than we did," said Arkansas' Isaiah Joe, who scored 12 points. "They wanted it a lot more."