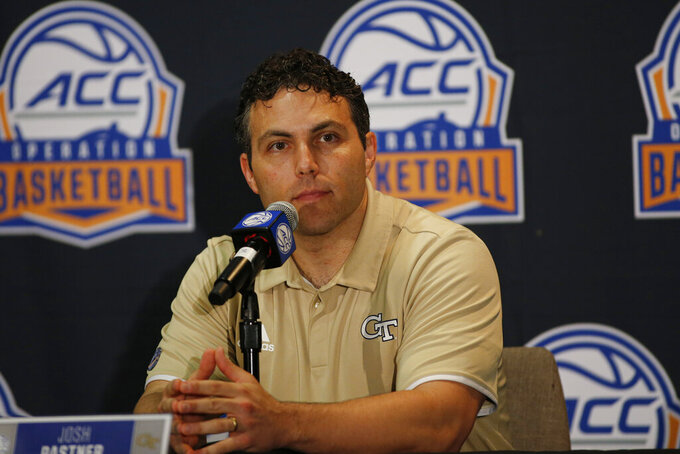 ATLANTA (AP) — As if they didn't have enough problems, the Georgia Tech Yellow Jackets were dealt a big loss before the season even began.

Josh Pastner's struggling program was hit with major sanctions by the NCAA for recruiting violations, including a ban on any postseason play this season and significant cuts in scholarships.

Georgia Tech has appealed part of that ruling, including the postseason penalty, and remains hopeful that it will have something to play for after the regular season.

"I'm sorry that this has happened," said Pastner, who is heading into his fourth season as the Yellow Jackets' coach. "It's no fun for anybody. I've been sick to my stomach."

Senior center James Banks III said it's not fair to make the current players suffer for the actions of others.

"The postseason ban, that just affects kids," he said. "Kids that had nothing to do with it, kids that had no idea these things were going on."

The postseason ban may be a moot point, given the way the last decade has gone.

The Yellow Jackets are approaching a decade since their last NCAA Tournament appearance in 2010. Pastner's teams were one-and-down at the Atlantic Coast Conference Tournament in each of his first three seasons.

No matter what happens with the NCAA appeal, Pastner's program desperately needs to take a major leap forward this season.

After overachieving a bit in his debut year (21 wins and a run to the final of the NIT), Pastner's squad slipped badly the last two seasons: a combined record of 27-37, including a 12-24 ACC mark.

Compounding the postseason drought, Pastner has yet to lure an elite prospect to Atlanta. When rival Georgia signed Anthony "Ant Man" Edwards, projected as a potential top pick in the 2020 NBA draft, that turned up the heat even more.

Georgia Tech must address its problems at the offensive end to have any chance at significant improvement.

The Yellow Jackets ranked last in the 15-team ACC at 65.3 points per game — more than 20 points behind North Carolina's league-leading 85.8 average.

Pastner's team put up the fewest shots in the conference, made fewer baskets than any team except Wake Forest and ranked next-to-last in 3-points percentage (.307).

"We've got to hang our hat on the defensive end, but we've got to be better on the offensive end," Pastner said. "We all want to score the ball more."

Georgia Tech returns eight of its top 11 players, including its three leading scorers from a year ago.

Junior guard Jose Alvarado averaged 12.5 points a game, the 6-10 Banks chipped in with 10.5 and made the ACC All-Defensive team, and 6-5 sophomore guard Michael Devoe scored at a 9.7 clip.

The Yellow Jackets also are counting on 6-9 junior forward Moses Wright, who finished the season with a 25-point effort against Notre Dame in the ACC Tournament.

"I'm real excited about this group," Pastner said. "Part of our deal is to get old and stay old."

A pair of transfers could bolster the roster.

Bubba Parham, a 5-10 guard and All-Southern Conference player at VMI, is eligible immediately after transferring to his home-state school. Jordan Usher, a 6-7 forward, can take the court in mid-December after a season and a half at Southern California.

During the first two months of the season, Georgia Tech faces three schools from the Southeastern Conference: making the short trip to Georgia on Nov. 20, hosting Arkansas on Nov. 25 and traveling to Rupp Arena to face No. 2 Kentucky on Dec. 14. Other early highlights are a Dec. 4 home game against Nebraska as part of the Big Ten/ACC Challenge, the ACC home opener against Syracuse on Dec. 7 and a Christmas holiday trip to Hawaii for the Diamond Head Classic.

Georgia Tech has a total of six games against the top 11 teams in The Associated Press preseason rankings.