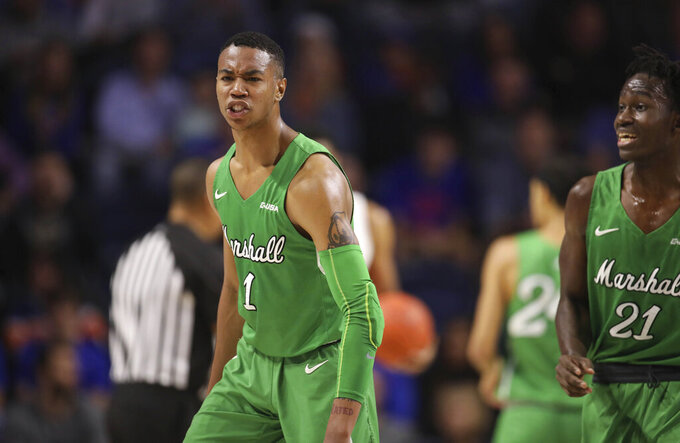 Marshall guard Taevion Kinsey (1) and forward Darius George (21) celebrate after a play against Florida during the first half of an NCAA college basketball game Friday, Nov. 29, 2019, in Gainesville, Fla. (AP Photo/Matt Stamey) 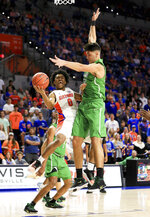 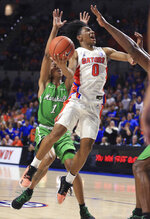 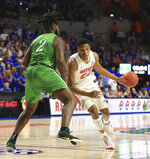 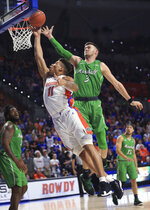 It was the Gators' fourth consecutive victory and first this season in which they trailed at the break.

Glover has played a pivotal role in the winning streak. After scoring just two points in the team's first four games, he has 40 in the last four.

“We knew it would just be a matter of time before he broke through,” coach Mike White said.

Glover carried the Gators (6-2) in the first half, scoring 10 points in 12 minutes. Without him, Florida would have been in an even bigger hole. The Gators trailed 33-25 at the break after missing all 10 shots from 3-point range and failing to notch an assist.

“I can’t imagine,” he said. “That ball stuck. We were stagnant.”

The Gators played with more energy and better ball movement for most of the second half, helping them avoid falling out of the national rankings for the second time in two weeks.

Still, they nearly gave it away in the final minute. Florida had a 13-point lead with a little more than 2 minutes to play, but Marshall (2-4) hit a 3-pointer, scored off a turnover and converted a three-point play to help make it a two-point game, 69-67.

Andrew Nembhard answered with a step-back floater in the lane with 20 seconds remaining. Dontay Bassett blocked a shot on the other end, and Noah Locke closed it out with a pair of free throws.

"I've said it all along, we're a growing team," Marshall coach Dan D'Antoni said. "This is going to help us grow. Not the way I want to. I want to do it with a 'W,' but we learned some valuable things about people."

The 5-foot-11 Glover made 5 of 9 shots to go along with four free throws and two rebounds. The last addition to White’s top-10 recruiting class, Glover credited his emergence with getting more comfortable at this level.

“It really has been confidence because coming in early in the season I was playing a little timid because I didn’t want to go out there and make mistakes and hurt the team,” Glover said. “Now I’m playing with more confidence, and it’s starting to help me and benefiting the team as well.”

Marshall: The Thundering Herd have enough talent and depth to be a factor in Conference USA despite being picked to finish 11th in the 14-team league in the preseason. They have size, speed and athleticism. If they can shoot a little better, especially from 3-point range, they should be fine.

Florida: The Gators, who have been up and down all season, struggled again with their long-range shooting. It’s a trend White wants and needs to fix.

Marshall: Hosts Akron on Wednesday. The Zips rallied to give No. 2 Louisville and West Virginia scares on the road.

Florida: Plays at Butler on Dec. 7, the return game in a home-and-home series. The Gators won the previous meeting 77-43 last December, one month after Butler upset Florida in the Battle 4 Atlantis in the Bahamas.