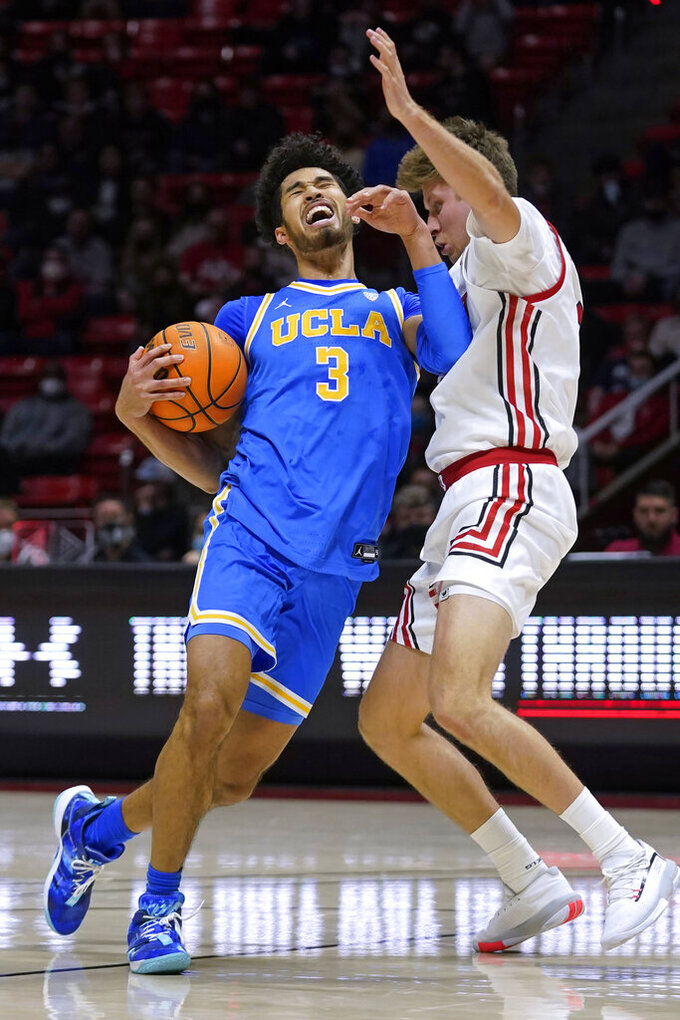 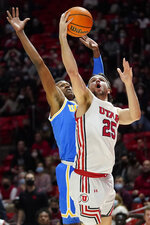 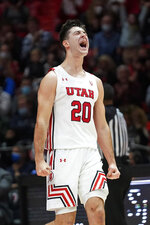 SALT LAKE CITY (AP) — It didn’t take Johnny Juzang long to realize it was going to be his night.

“I knew pretty early,” Juzang said. “My teammates found me early and that got me going.”

Good thing for No. 9 UCLA, because he didn’t get much help on offense.

Juzang scored a season-high 28 points and the Bruins outlasted Utah 63-58 on Thursday.

“He knew he could score so we were trying to get him in as much space as we could. I probably should have got some more opportunities, but they were really trying to take it away from us,” UCLA coach Mick Cronin said.

Jules Bernard added 14 points for the Bruins (12-2, 4-1 Pac-12), who had a difficult time shaking the last-place Utes even after a brilliant start.

Lazar Stefanovic scored a career-high 18 points but missed an open jumper from the top of the key that could have tied the game late. Both Gach had 11 points for Utah (8-11, 1-8), which has lost seven straight.

“I’m unbelievably proud of our kids. Gave ourselves every opportunity to win. Played a complete game on both ends … and really showed a lot of tenacity,” Utah coach Craig Smith said.

Trailing 54-51, the Bruins went on a 7-0 run capped by Juzang’s drive. The Utes had a couple of chances to tie it in the final 30 seconds, but Jaime Jaquez Jr. drew an offensive foul on Gach and the Utes missed two 3-pointers.

“I know Gach likes to go hard in transition … and once I saw him put his head down, I just slid over and took it. I was scared since the ref took a while to call it,” Jaquez said.

Utah kept the game tight by trapping on defense in the post and staying attached to perimeter shooters. After committing only three turnovers in the first half, the Bruins lost the ball four times in a 3:36 span and Utah regained the lead.

Midway through the second half, Tyger Campbell went down hard after driving for a contested layup and writhed in pain as Stefanovic hit a 3-pointer on the other end for a 46-42 Utah advantage.

“We struggled with our execution. Their physicality bothered us around the rim,” Cronin said.

The Utes played without Branden Carlson, their leading scorer who has missed four games due to appendicitis. So they relied on the long ball and went 11 for 26 from 3-point range while making only seven field goals inside the arc.

The focal point of the Bruins’ offense all game, Juzang shot 9 of 13 and connected on three of UCLA’s five 3-pointers. The performance marked his third straight game with 20 or more points, but he said the key to the game was his teammates’ clutch play at the end.

“It was a battle all game and came down to those last four minutes. Everybody made smart plays, big-time plays and hustle plays that were huge,” Juzang said.

Juzang sparked the Bruins to a 12-3 lead and scored 13 of UCLA’s first 17 points. Problem was, none of the other Bruins besides Jaquez could generate much offense. The Utes crept back and took the lead on a 3-pointer by Stefanovic with 7:36 to play until halftime.

Despite 18 first-half points from Juzang, Utah led 32-31 at the break after Riley Battin’s 3-pointer.

Before the trip, Cronin warned: “In conference play, every team is dangerous and every game is a bloodbath.” He said if a team gets confidence – no matter its record – anything can happen.

After escaping with the win, Cronin didn’t want to nitpick his team’s performance.

“We got one on the road in conference! It’s not supposed to be pretty,” he said.

UCLA: The Bruins seemed uneasy when they couldn’t get Juzang the ball, but their defense carried the day. Campbell and Jaquez went a combined 5 for 19 but made big plays down the stretch. Juzang faced a variety of defenders and occasional double-teams, but Utah couldn’t stop him.

Utah: The Utes continued to make mass substitutions nearly every dead ball. That kept players fresh and they were feisty and physical, but some had trouble getting into an offensive rhythm. The defense flummoxed the Bruins at times and the motion offense got shooters loose for some open perimeter looks, which certainly gives Utah hope of breaking the losing streak soon.

When the Bruins dropped a home game to Oregon last week they nearly tumbled out of the top 10, but they steadied the ship when it mattered against Utah.