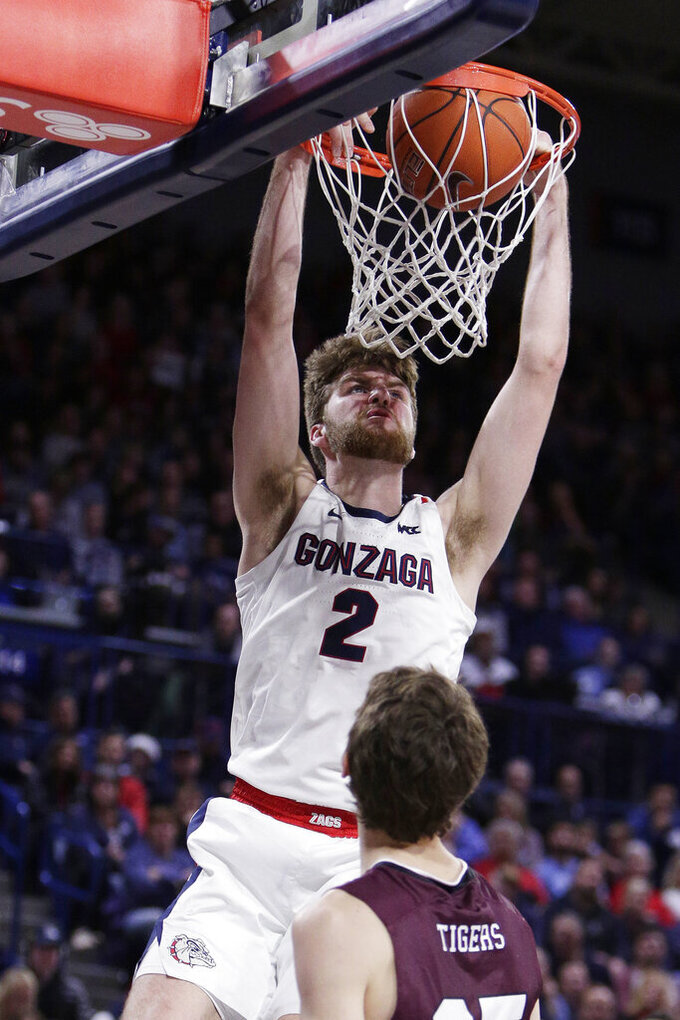 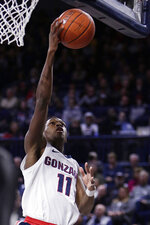 SPOKANE, Wash. (AP) — Joel Ayayi found out Wednesday morning he would be in No. 9 Gonzaga's starting lineup, replacing Admon Gilder.

After two years of coming off the bench, he wanted to make an impression.

“I've got to be aggressive,” the sophomore from France said. ‘’It's been two years. Obviously, it's been hard.'"

Seven Zags scored in double figures, led by Corey Kispert's 17 points, as Gonzaga (9-1) rebounded from a loss to Michigan in the Battle 4 Atlantis title game.

The Zags have 28 consecutive home wins, second-longest streak in the nation after Tennessee's 31.

Filip Petrusev, who had 12 points and six rebounds, said Gonzaga wanted to come out strong after losing to Michigan.

“'We wanted to come back from the loss,'” Petrusev said. “'That was our first loss since last year.'”

Petrusev said Ayayi is '"getting better and better. He's doing things the team needs him to do."'

Texas Southern scored three straight baskets to get to 25-21.

Gonzaga scored the first nine points of the second half for a 62-30 lead.

Kispert's 3-pointer gave Gonzaga an 82-46 lead with just under eight minutes left in the game.

Now Gonzaga turns its attention to a difficult three-game run that begins Saturday at No. 22 Washington.

Petrusev said he also loved the atmosphere at Washington. "'It gets me fired up,"' he said.

While the Zags are nursing numerous minor injuries, the relatively easy victory over Texas Southern will help the team as it plays Washington, No. 12 Arizona and No. 7 North Carolina in the next two weeks, Petrusev said. He noted the Zags were drained by an overtime victory over Oregon the day before they played Michigan

Ayayi also said the easy win will help the Zags as they prepare for the tough stretch.

“”It's important because we do not play a lot of guys,"' he said.

"'We got beat tonight, but we'll bounce back and learn from it,"" Jones said. “”Games like this make us better.""

“”We have to do a better job of defending in the paint and rebounding the basketball,"' Jones said, after his team was outrebounded 51-32 and outscored 68-32 in the paint.

In addition to Kispert and Ayayi, the Zags got 12 points each from Petrusev, Killian Tillie and Drew Timme. Ryan Woolridge scored 11 and Admon Gilder scored 10.

Texas Southern: The Tigers were picked to finish second in the Southwestern Athletic Conference. Their defense came in yielding 79.9 points per game. They have lost to Gonzaga each of the previous two years.

Gonzaga: The Bulldogs have five players banged up, and were seeking to rebound from an 82-64 loss to Michigan last Friday that was their most lopsided since 2014. They are 14-0 all-time against SWAC teams.

Gonzaga plays at No. 22 Washington on Sunday, followed by a game at No. 12 Arizona on Dec. 14 before returning home to face No. 7 North Carolina on Dec. 18.