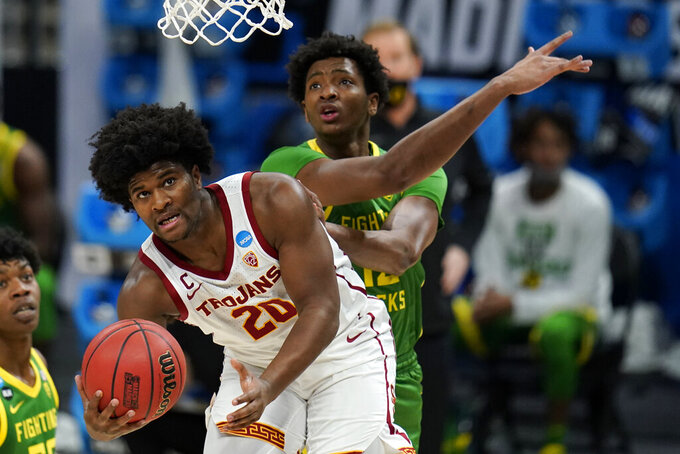 FILE- In this March 28, 2021, file photo, Southern California guard Ethan Anderson (20) shoots in front of Oregon forward Chandler Lawson, rear, during the first half of a Sweet 16 game in the NCAA college basketball tournament at Bankers Life Fieldhouse in Indianapolis. The Trojans were picked to finish third in the Pac-12. Ethan Anderson is back running the offense full-time after coming off the bench last season due to injury. (AP Photo/Jeff Roberson, File)

LOS ANGELES (AP) — Evan Mobley fueled Southern California’s first Elite Eight appearance in 20 years. He’s off to the NBA, leaving brother Isaiah Mobley with his own chance to propel the Trojans on another March run.

After flirting with the NBA draft, Isaiah Mobley opted to return to the Trojans. The junior forward is a versatile big man coming off the momentum of playing his best basketball during the NCAA Tournament.

Mobley averaged 9.9 points and 7.9 rebounds last season playing alongside his younger brother, who was the third overall pick in the NBA draft. Isaiah will anchor USC’s frontcourt, along with senior Chevez Goodwin and junior Max Agbonkpolo.

Evan Mobley won a trio of Pac-12 postseason honors, including Player of the Year. Isaiah could follow in his footsteps.

The Trojans were picked to finish third in the Pac-12. They received votes in The Associated Press Top 25 preseason poll. With Mobley, Isaiah White and Drew Peterson, the Trojans boast a trio who’ve started a combined 56 games. USC was 25-8 last season and finished second in the league at 15-5.

“Our players expect to win this year,” Enfield said, “and they’ve come with a lot of leadership and a lot of enthusiasm.”

Enfield is 157-110 heading into his ninth season, with the Elite Eight berth being the highlight of his USC tenure.

The Trojans open the season on Nov. 9 at home against Cal State Northridge.

Ethan Anderson is back running the offense full time after coming off the bench last season due to injury. “He’s in great shape, he’s more explosive now,” Enfield said. “We need him to be good for us to have a good season.” Transfers Taj Eddy and Drew Peterson were capable subs for Anderson. Eddy is gone, leaving Peterson to take on a bigger scoring role after doing a little bit of everything last season. He averaged 9.8 points and 5 rebounds last season. White showed late last season that he can provide valuable offense. Freshman Malik Thomas could be a factor, too, although he’s under no pressure to produce immediately. “Our rotations are not set yet,” Enfield said. “Our practices are extremely competitive with a lot of talent on the floor.”

Guard Boogie Ellis’ college odyssey opens a new chapter at USC. He was a top prospect coming out of San Diego who committed to Duke before ending up at Memphis. He was the AAC’s Sixth Man of the Year last season. He started 15 of 28 games for the Tigers, averaging 10.2 points and shooting 39% from 3-point range. He’s aggressive on defense, which fits well with Enfield’s style.

Besides Thomas and Ellis, the Trojans landed top recruits Kobe Johnson and Harrison Hornery. Johnson averaged 26.7 points and 10.4 rebounds at his Wisconsin high school. Hornery, a 6-foot-10 forward from Australia, is a solid outside shooter who has time to fill out and learn to play physical under the basket. They should get opportunities to contribute important minutes.

After their NCAA Tournament run, the Trojans were given two years' probation and fined by the NCAA as the result of the FBI investigation into former assistant coach Tony Bland. The school agreed to self-imposed sanctions, too. The punishment includes a reduction in official visits and recruiting days. Overall, it wasn't a huge blow because Enfield still landed a solid recruiting class.

After its opener, USC heads to the East Coast for games at Temple on Nov. 13 and Florida Gulf Coast three days later. It's a homecoming at FGC for Enfield, who guided the small school to the Sweet Sixteen as a No. 15 seed in the 2013 NCAA Tournament. That success helped him land his current job. The Trojans open Pac-12 play on Dec. 1 at home against Utah. They'll play crosstown rival UCLA on Feb. 12 and March 5. The Trojans have beaten the Bruins two years in a row on late 3-pointers.