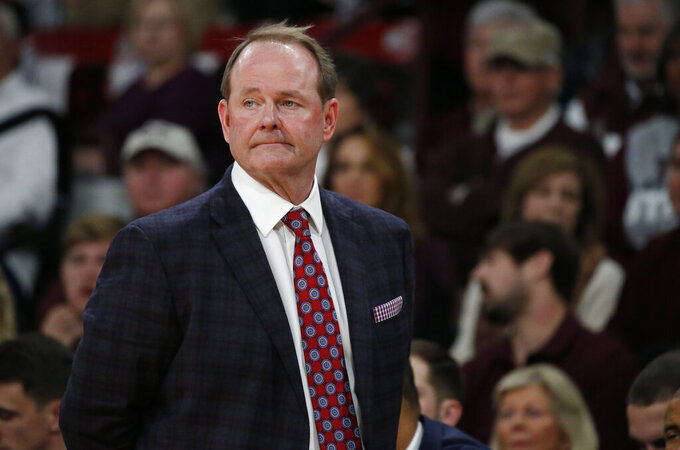 In this Jan. 12, 2019, photo, Mississippi basketball coach Kermit Davis oversees floor action in a NCAA college basketball game against in-state rival, Mississippi State, in Starkville, Miss. The coaching comeback of Davis is a tale three decades in the making and as Mississippi's first-year coach has the Rebels back in the AP Top 25 for the first time since 2013. (AP Photo/Rogelio V. Solis) 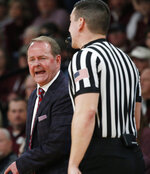 OXFORD, Miss. (AP) — Mississippi's Kermit Davis is getting another crack at a big-time men's basketball coaching job nearly 30 years after the lowest point in his career.

Two months into the season, Davis has the Rebels in the Top 25 for the first time since 2013.

It's been a long road back to the top for the veteran coach.

In 1991 he resigned at Texas A&M amid an NCAA investigation which resulted in Davis receiving a two-year show cause penalty. Now, his No. 18 Rebels will try to earn their 11th win in 12 games when they face Arkansas on Saturday.

"I don't care if you're a basketball coach, a banker or a lawyer, it's just different paths for everybody," Davis said. "The basketball gods have put me right here and I'm so fortunate."

It's a comeback story nearly three decades in the making. Davis' journey is a fascinating tale of NCAA exile as a young coach, to a prominent assistant coach, to mid-major success as a head coach to the job in Oxford where he has No. 18 Ole Miss (13-3, 3-1 SEC) off to a surprising level of success during his first season.

Davis is the son of Kermit Davis, Sr., who was Mississippi State's coach in the 1970s. After his playing career, the younger Davis quickly established himself as a rising young coach. He was a junior college head coach at 24 and earned his first Division I job at Idaho in 1988 when he was just 28.

Success came quickly. He led the Vandals to back-to-back NCAA Tournaments in 1989 and 1990.

Davis parlayed that success into a job at Texas A&M, but that's when his career took a drastic detour. The Aggies struggled — Davis was 8-21 in his only season — but the biggest problems came off the court. He resigned in 1991 amid an NCAA investigation into recruiting violations and the Aggies were eventually hit with two years of probation and a one-year postseason ban.

Davis received a two-year show cause penalty, which essentially made him unemployable for an NCAA school. He spent those years as a coach at a junior college in Florida.

He said his family — especially his wife and daughter Ally, who has Down syndrome — kept him grounded during the tough times.

"It's a learning experience that will make you better — I promise you that," Davis said of his Texas A&M days. "It made me better. I learned from it and that's the biggest thing you can do. I ... didn't dwell on it and took responsibility for it."

After his junior college stint in Florida, Davis eventually landed at LSU as an assistant coach under John Brady. In Baton Rouge, Davis helped build a program that eventually went to the NCAA Tournament's Sweet Sixteen in 2000.

One of the key players on that Tigers' team was freshman Ronald Dupree, who eventually turned into an All-SEC performer. Davis had a pivotal role in recruiting and developing Dupree, who later spent six seasons in the NBA.

Dupree called Davis "an ol' ball coach" and a gifted recruiter who wasn't afraid to challenge everyone on the roster. Now Dupree is a scout for the NBA's Milwaukee Bucks, and he's also grown to appreciate Davis' ability to build programs.

"He's a guy who understands talent," Dupree said. "He can evaluate and then put guys in a position to succeed. He can put together a team. He knows his stuff enough where guys buy in, so he's never had an issue with players buying in to what he can do."

From LSU, Davis became the head coach at Middle Tennessee in 2002, and the program eventually grew into a mid-major powerhouse. The apex came in 2016, when the Blue Raiders — who were a No. 15 seed — knocked off No. 2 seed Michigan State in the NCAA Tournament.

But by that time, Davis was creeping into his late 50s. The coach said he would get a little wistful when big jobs opened each spring, but that he never pursued many openings because his family was happy at Middle Tennessee.

Then the Ole Miss job came available. The pull to return to his home state was strong.

So far, it's hard to argue with the results heading to the Rebels SEC matchup against Arkansas (10-6, 1-3).

Guards Terence Davis and Breein Tyree have blossomed under Davis's leadership. Terence Davis, a 6-foot-4 senior averaging about 16 points per game, said his coach's sense of urgency was apparent from the first moment he walked into the locker room. The Rebels lost 20 games just one year ago, but Kermit Davis wasn't interested in a slow turnaround.

"The first thing he told me and the rest of the seniors was that this wouldn't be a rebuilding year," Terence Davis said. "He said that wouldn't be fair to the seniors and he thought we had the talent in the room, if we took coaching well, to turn this thing around.

"We all believed it."

Now, they're trying to make believers out of the rest of the SEC.