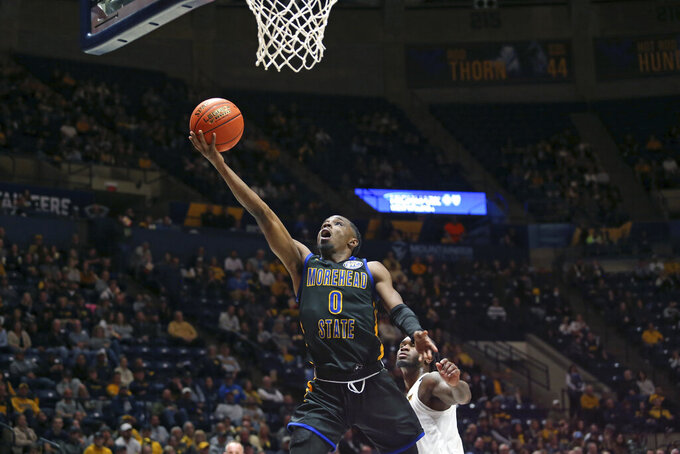 Coach Bob Huggins earned his 919th career win, moving within one of Jim Calhoun for third place all-time among Division I coaches, behind only Jim Boeheim of Syracuse and recently retired Duke coach Mike Krzyzewski.

Jimmy Bell and Mo Wague added 10 points apiece for West Virginia (3-0), which has won every game by double digits.

Emmitt Matthews scored seven of his nine points during a 21-4 run and West Virginia extended a nine-point halftime lead to 65-39 with 7:25 remaining.

Things didn’t start out so well for the Mountaineers. West Virginia committed five turnovers in the first three minutes and Huggins soon was issued a technical foul. The Mountaineers also had a shot-clock violation and trailed 8-4 six minutes into the game.

Ohio Valley Conference preseason favorite Morehead State had its own problems. The Eagles were called for four offensive fouls in the first 12 minutes and had 12 first-half turnovers.

Mitchell, who is not fully healed from a preseason foot injury, scored six points during a 10-2 run, had 15 in the first half and the Mountaineers led 37-28 at halftime.

Morehead State: The Eagles couldn't keep up, making 33% (10 of 30) of their field goals after halftime after shooting 50% in the first half.

West Virginia: The Mountaineers had 42 points in the paint and eventually turned the game into a track meet, scoring 32 points off of 20 Morehead State turnovers.