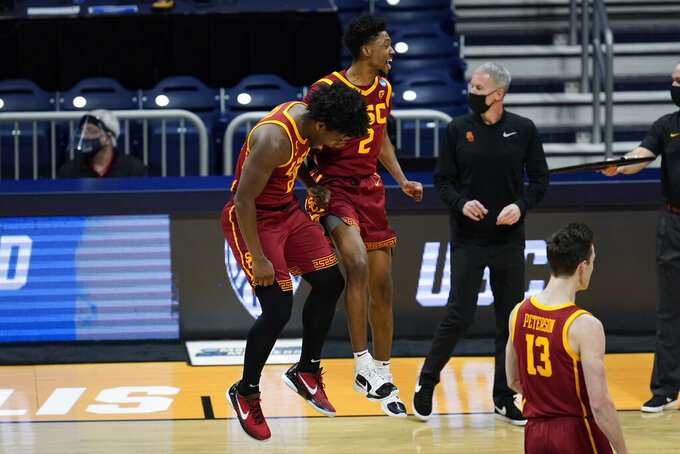 USC guard Ethan Anderson (20) and Tahj Eaddy (2) react after a basket against Kansas during the first half of a men's college basketball game in the second round of the NCAA tournament at Hinkle Fieldhouse in Indianapolis, Monday, March 22, 2021. (AP Photo/Paul Sancya)

The only surprise about this one? How handily his Trojans took apart No. 3 seed Kansas.

Isaiah Mobley hit four 3-pointers and scored 17 points, All-American little brother Evan added 10 points and 13 rebounds, and sixth-seeded USC rolled to an 85-51 victory Monday night inside Hinkle Fieldhouse — more than doubling the worst margin of defeat for the Jayhawks in 49 trips to the NCAA Tournament.

“This game meant a lot to our program and our fans. USC basketball is on the rise,” said Enfield, who coached No. 15 seed Florida Gulf Coast to the Sweet 16 in 2013 and now has the Trojans there for the first time in 14 years.

They will face seventh-seeded Oregon in a Pac-12 showdown Sunday night.

“Over the last 80 years, it's been like a rollercoaster,” Enfield said, “a lot of great players, great coaches, great teams, but we're trying to build a program and sustain success, and beating a program like Kansas is a great step.”

Isaiah White contributed 13 points, Tahj Eaddy had 12 and Chevez Goodwin 10 for the red-hot Trojans (24-7), who went 11 of 18 from the 3-point arc, shot 57% from the field overall and nearly doubled up the Jayhawks on the glass.

“Everyone contributed tonight, whether it showed up on the stat sheet or not, and that's why we won by the margin we did,” Isaiah Mobley said. “When we're confident, I believe in our team, that we can go up against anybody.”

Marcus Garrett had 15 points for Kansas (21-9), which had never lost an NCAA tourney game by more than 16 points.

“That's about as poor as we can play,” Jayhawks coach Bill Self said, “and I'm sure Andy would say that was certainly one of their better moments, better games. It was a bad combination all the way around for us.”

One of college basketball's tradition-rich programs, the Jayhawks had played nearly 3,200 games without ever setting foot on the floor of Hinkle Fieldhouse — the iconic hoops cathedral made famous by the Hollywood film “Hoosiers.”

The way they played Monday night, they won't be eager to return.

The Jayhawks missed their first eight shots, most of them wide open looks. And after Christian Braun finally hit a 3-pointer, they missed three more. Throw in a couple turnovers, and they were headed for a point total straight out of the 1940s.

At the other end, the Trojans looked like they were in a pregame layup line the way Kansas kept breaking down on D.

On a sequence that perfectly summed up the first half, Braun — an 81% free-throw shooter — missed two, and Isaiah Mobley followed with a deep 3-pointer as the shot-clock expired. As the teams headed the other way again, Kansas coach Bill Self crossed his legs and reclined in his folding chair — the very picture of frustration and resignation.

Mobley's four first-half 3s, doubling his career best for an entire game, staked the Trojans to a 40-21 lead at the break.

The reaction from former All-American guard Frank Mason III, now in the G League: “Tell Coach Self I’m headed to the game,” he tweeted at halftime. “I’ll be there by the 10 min mark; ready to sub in on arrival.”

Wilt Chamberlain wouldn't have made a difference on this night.

Kansas trimmed its deficit to 16 early in the second half, but Enfield immediately called timeout and the momentum swing was over. White hit a trio of 3-pointers in a span of about three minutes, and Drew Peterson also knocked one down as the Trojans again stretched their lead stretched beyond 20 and effectively put the game away.

“They were obviously more prepared. They played better, coached better — we shot it miserably and it's going to be hard to score for us over that length. And they shot it unbelievably,” Self said. “We played from a hole the entire time.”

Southern California continued a banner tournament for the Pac-12, which is now 9-1 with four of its five teams reaching the Sweet 16. The only team to lose is Colorado, which beat the Trojans in the conference tournament.

Kansas hoped the return of Jalen Wilson, who flew into Indianapolis earlier in the day, from his COVID-19 quarantine would provide a spark. But the Jayhawks' leading rebounder was just as ineffective as everyone else against the Trojans' big front line. Kansas wound up getting beaten 43-27 on the boards.

The Trojans play seventh-seeded Oregon, which cruised past No. 2 seed Iowa earlier in the day, in a Pac-12 showdown for a spot in the West Region finals. USC beat the Ducks in February in their only meeting this season.

“We have a lot of respect for that team," Enfield said. “The Pac-12, we’ve been trying to tell you guys the last few years, the Pac-12 is really good. I think you've seen that. So to play Oregon in the Sweet 16, honestly, I wish we were playing a team from another conference. But at least one of us will move on to the Elite Eight."