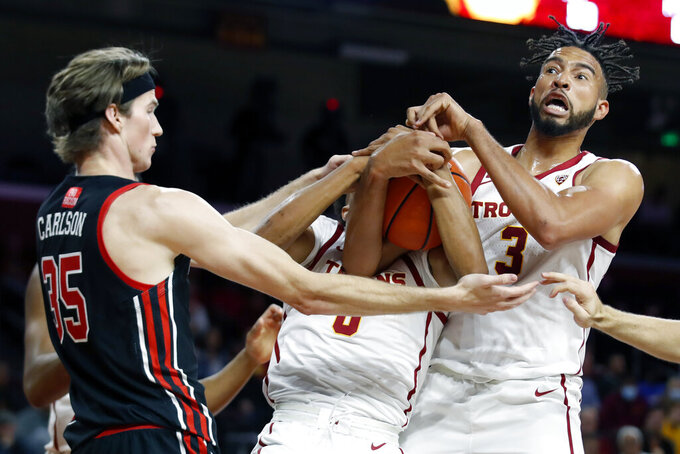 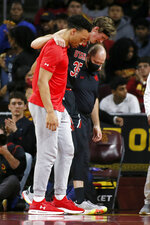 LOS ANGELES (AP) — Isaiah Mobley kept the momentum going in what has been a fun week around the Southern California campus.

The junior forward scored a career-high 21 points and tied a career high with 13 rebounds as the 20th-ranked Trojans opened Pac-12 play Wednesday night by rolling to a 93-73 victory over Utah.

“Campus is a great place right now after what I called a year of silence,” Mobley said. “We just got the new hire (in football). Everyone is happy and we're trying to keep it that way.”

While Lincoln Riley's arrival as football coach has dominated headlines and airwaves the past couple days, the basketball team is off to its best start since 2017 after advancing to the Elite Eight last season.

Mobley recorded a double-double for the second straight game as USC remained unbeaten at 7-0 and 1-0 in conference. It is the Trojans' best start since 2016-17, when they opened 14-0.

“He played really solid on both ends. He was a complete player tonight, which was great to see,” USC coach Andy Enfield said.

The Utes got the margin down to 13 midway through the second half before the Trojans pushed their lead up to 20 by the end of the game.

“It was a good win for us. I thought we shared the ball on offense and our whole team played well,” Enfield said. “We have a long season to go but we're happy with our team.”

Utah's Both Gach tied a career high with 28 points and David Jenkins Jr. added 21. The Utes (5-2, 0-1) have dropped two straight after winning their first four.

Branden Carlson — who came into the game as Utah's leading scorer — suffered what appeared to be a right ankle injury midway through the first half and did not return. The junior center had a boot on his right foot as he watched the rest of the game from the bench.

With Utah having a smaller lineup, the Trojans enjoyed a 51-32 advantage on the boards and outscored the Utes 54-26 in the paint.

“This is one of the biggest teams in the country and their size makes a difference. They’re a very good rebounding team and they are elite at scoring around the basket,” Utah coach Craig Smith said. “We got really sped up in the first half and were rushing things instead of playing with poise. We did a better job in the second half.”