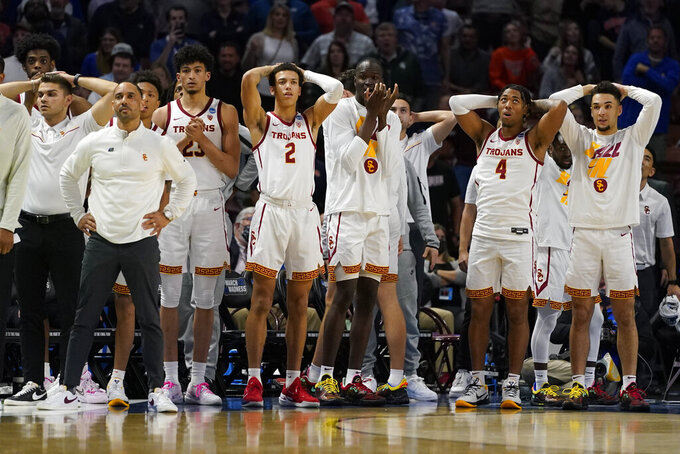 Southern California reacts during their loss against Miami during the second half of a college basketball game in the first round of the NCAA tournament on Friday, March 18, 2022, in Greenville, S.C. (AP Photo/Chris Carlson)

GREENVILLE, S.C. (AP) — Charlie Moore used all the focus he'd learned at California, at Kansas, at DePaul and now Miami to produce the biggest moment of his career in the NCAA Tournament.

Moore's free throws with three seconds left lifted the 10th-seeded Hurricanes to a 68-66 win over No. 7 seeded Southern California in the Midwest Region on Friday.

Moore, at his fourth school in his sixth college season, calmly swished through the winning shots to send Miami (24-10) to its first NCAA win in six years.

“I just wanted to focus and take my time,” Moore said of the final moments. “I felt like, if I make them, we had a great chance of winning the game, and I knocked them down.”

USC (26-8) had a final chance, but Drew Peterson's half-court attempt hit off the backboard and the front rim before bounding away.

Not before a couple of dramatic comebacks. USC trailed by 13 points three minutes before halftime before rallying to a 37-32 lead. Then, down 65-58 with 44 seconds to go, Peterson made two 3-pointers and a layup to tie things at 66-all and set up Moore's winning foul shots.

Moore drove the lane in the final moments and appeared to have his layup blocked by Chevez Goodwin. But a foul was called on Ethan Anderson and Moore made the free throws.

Miami coach Jim Larranaga, who led George Mason to the 2006 Final Four, will take his Hurricanes to the second round Sunday for a game against Auburn.

Isaiah Wong led Miami with 22 points before fouling out with 2:07 to play with his team ahead 59-58.

Miami won its first NCAA game since defeating Wichita State in the second round in 2016.

Wong scored the next five points to regain the lead and set up a tight, back-and-forth battle to the final seconds.

There were eight lead changes over the final 11 minutes.

“This is a good win for the university because it's been a minute since we've been here,” Wong said. “With the team we have right now, we've been playing good.”

Especially Wong, who who hit seven of his 12 shots and eight of his nine free throws.

Miami: The Hurricanes leaned heavily on Wong the first 37 minutes, then got contributions from Moore and Kameron McGusty to advance. They'll need everyone from the start if they hope to keep playing after Auburn showed its power and versatility in an 80-61 first-round victory over Jacksonville State.

Southern California: The Trojans' slow start put them in an early hole, and it didn't help that they had trouble taking care of the ball with 18 turnovers, 12 off steals. USC made just 8 of 27 shots the first 20 minutes as Miami moved out to a double-digit lead.

USC's Enfield got a six-year contract extension on the eve of the postseason. The new deal, announced March 9, will keep Enfield at the school through the 2027-28 season. Before this loss, Enfield and the Trojans had won five of their last seven NCAA Tournament games including a run to the Elite Eight a season ago.

“Back in September at practice, we turned the ball over like it was a good thing,” he recalled. “Everybody’s turning the ball over, turning it over, bad passes everywhere.”

Larranaga talked with his players and the message worked as the team's offensive flow and efficiency improved. The team has had 16 games with single-digit turnover performances.