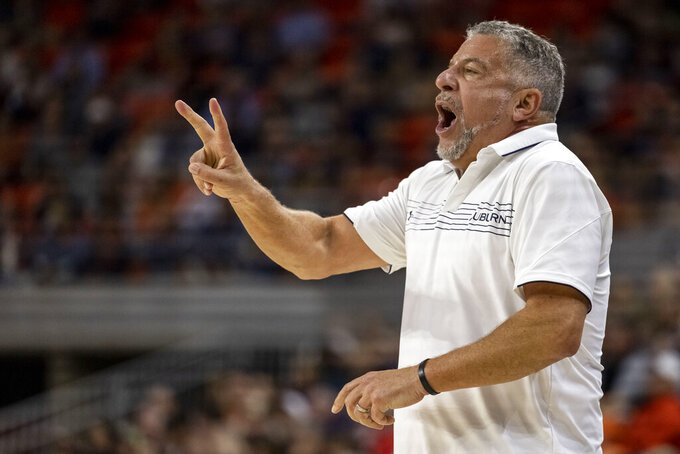 Auburn head coach Bruce Pearl signals in during the first half of an NCAA college basketball game against Yale, Saturday, Dec. 4, 2021, in Auburn, Ala. (AP Photo/Vasha Hunt)

An NCAA Committee on Infractions panel issued its findings Friday. The NCAA, however, mostly accepted Auburn's self-imposed penalties in the case dating back to September 2017, when FBI agents arrested Person as part of a wide-ranging investigation into corruption in college basketball.

Pearl will be suspended the next two games for the 18th-ranked Tigers, Saturday against Nebraska in Atlanta and next Tuesday against North Alabama.

The report released by the infractions committee panel said Pearl “violated head coach responsibility rules because he did not adequately monitor the associate head coach and failed to promote an atmosphere of compliance.

Pearl has had previous run-ins with the NCAA. Tennessee had fired Pearl in 2011 after the NCAA charged him with unethical conduct and then additional violations surfaced.

“The panel did take into consideration the previous show cause and decided it is an aggravating factor and was factored into the penalty for coach Pearl,” said Vincent Nicastro, the panel's chief hearing officer and deputy commissioner and chief operating officer of the Big East Conference.

Pearl was in the final months of his show cause penalty when Auburn hired him.

“We respect the NCAA peer evaluation process and appreciate the panel recognized we took meaningful and contemporaneous penalties,” Pearl said in a statement. "It is time to put this behind us. As part of our penalty, I will begin my two-game suspension against Nebraska.”

The NCAA panel found that Person violated ethical conduct rules by accepting $91,500 in bribes from a financial advisor to steer prospects Austin Wiley and Danjel Purifoy to Auburn. The NCAA release didn't name the coaches or players. The panel said the players or their families received more than $10,000 from Person.

Person, who was fired by Auburn after his arrest, avoided prison time when a federal judge ordered him to do 200 hours of community service in July 2019.

Person, a former Auburn star and NBA player and assistant, received a 10-year show cause penalty while another assistant, Harris Adler, received a one-year show cause for allegedly paying a walk-on player's tuition. The panel said it didn't find sufficient evidence that Adler paid the tuition but cited his lack of cooperation in responding to a request for a third interview.

During that period, any NCAA member school that hires them would have to restrict them from duties related to athletics or show why the restrictions shouldn't apply.

The committee didn't add to last season's self-imposed postseason ban and other recruiting restrictions already enforced in previous seasons. Auburn also cut one scholarship in the 2020-21 season and will lose two more during the probation period.

The NCAA fined Auburn $5,000 plus 3% of the program's budget. Auburn will vacate any wins during which the athletes played while ineligible.

Auburn held out both Wiley, a five-star recruit whose parents once starred for the Tigers, and Purifoy for the entire 2017-18 season.

The panel found both Person and the school committed Level I-aggravated violations. Pearl and Adler's violations were Level I-mitigated.

“We are pleased that a conclusion has been reached in this case," Auburn said in a statement. "For the last four years, Auburn has been proactive and cooperative with the NCAA enforcement staff and Committee on Infractions.

"We have been and will continue to be committed to NCAA rules compliance. As such, we accept all penalties and are ready to move forward.”

Nicastro said this was the last of the federal-corruption cases to go through the NCAA’s standard peer-review infractions process. An infractions committee panel issued sanctions against Oklahoma State in 2020 that included a postseason ban.

The school was able to play in the NCAA Tournament while appealing that ruling before the penalty was upheld in November, leading coach Mike Boynton to tearfully say there is no point in cooperating with the NCAA.

It was created as a product of proposals from the commission led by former U.S. Secretary of State Condoleezza Rice in 2018 to reform college basketball amid the federal corruption investigation into the sport.