No. 18 Tennessee's roster loaded with addition of newcomers 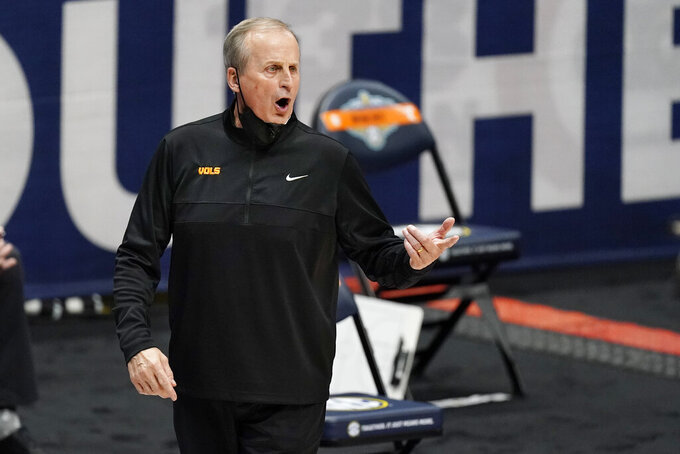 FILE — In this March 13, 2021, file photo, Tennessee head coach Rick Barnes yells to his players in an NCAA college basketball game against Alabama in the Southeastern Conference Tournament in Nashville, Tenn. With the talent Barnes has assembled, Tennessee is looking for a fourth NCAA Tournament berth trying to improve on the regional semifinal reached in 2019. (AP Photo/Mark Humphrey, File)

Tennessee coach Rick Barnes has scratched every box in filling the roster for his seventh season.

He has experience with John Fulkerson back as a graduate along with senior Victor Bailey Jr. Josiah Jordan-James, a McDonald’s All-American coming out of high school, now is a junior with a knack for filling up a stat sheet.

Then there's a freshman class that was ranked the No. 4 group nationally and best in the Southeastern Conference by 247Sports. The new Vols are led by a pair of five-star recruits in point guard Kennedy Chandler and forward Brandon Huntley-Hatfield.

With seven freshmen, Barnes has leaned heavily on his upperclassmen to get the 18th-ranked Vols up to speed as quick as possible.

“They know we need the younger guys to grow up quick,” Barnes said.

“Our schedule, I could talk to you about maybe are we over scheduled with this young group. I do believe, and we do as a staff, that the more that we can expose them to hard competition early, we think it will help us grow up quicker. We certainly hope so.”

The Volunteers are trying to rebound from a disappointing season. They went 18-9 and reached the SEC Tournament semifinals before losing their NCAA Tournament opener as the No. 5 seed to Oregon State.

With the talent Barnes has assembled, the Vols are looking for a fourth NCAA Tournament berth trying to improve on the regional semifinal reached in 2019. James thinks the Vols will be just fine with how quickly the newcomers have picked up Barnes' system.

“They’ve definitely learned it a lot quicker than I did, I’ll say that," James said.

Tennessee has not one but two guards to run the point. Chandler from Memphis was the top-rated point guard in 247Sports composite rankings, and he helped the U.S. win the FIBA U-19 gold medal this summer. Zakai Zeigler from Long Island, New York, signed with the Vols in late August after a big showing at the Peach Jam.

Santiago Vescovi, who helped handle the point last season, now is free to play his more natural position of shooting guard. He also has had a chance to work on his quickness after struggling last season.

“I feel that I’m a lot better in that aspect this year,” Vescovi said. "Just creating offense for me and other people will be a lot better as well this year.”

Thanks to the extra year allowed by the NCAA because of the coronavirus pandemic, Barnes has 18 players available. That includes 6-foot-9 Fulkerson, who was knocked out of the SEC Tournament and the NCAA Tournament with a facial fracture and concussion caused by a pair of elbows by Florida’s Omar Payne.

Tennessee had a 7-footer in junior forward Uros Plavsic. Thanks to the newcomers, Barnes now has three other players at least 6-10 or taller.

Forward Jonas Aidoo is 6-11, while 6-10 Huntley-Hatfield reclassified from 2022 to 2021 in committing to the Vols. Handje Tamba is a 6-11 forward who emigrated from the Democratic Republic of Congo in 2017, and the Knoxville resident also reclassified to 2021.

The Volunteers have a challenging non-conference schedule featuring eight teams ranked in the preseason Top 25. That includes No. 4 Villanova on Nov. 20 in Connecticut in the Hall of Fame Tip-off Tournament with 19th-ranked North Carolina or No. 7 Purdue the second opponent in that event.

Tennessee also will play No. 12 Memphis on Dec. 18 in Nashville with 10th-ranked Kentucky and No. 16 Arkansas part of the SEC slate.