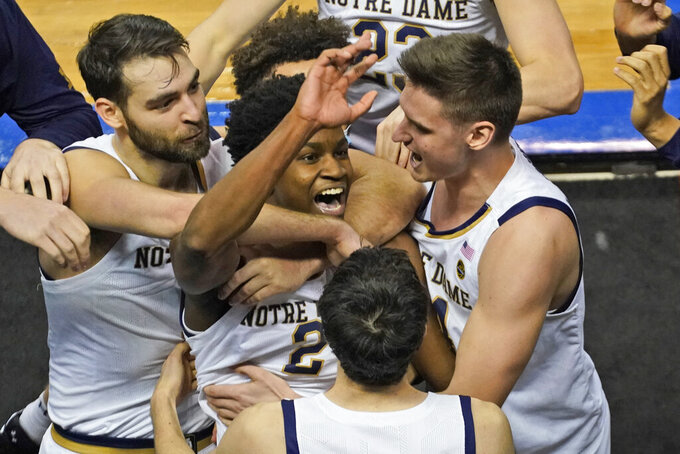 Notre Dame guard Trey Wertz (2) who sank the game-winning shot is swarmed by teammates after their 80-77 win over Wake Forest in the first round of the Atlantic Coast Conference tournament in Greensboro, N.C., Tuesday, March 9, 2021. (AP Photo/Gerry Broome) 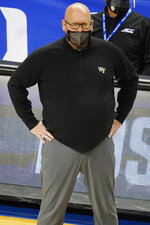 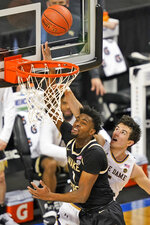 GREENSBORO, N.C. (AP) — Trey Wertz hit a deep 3-pointer at the buzzer to cap a 17-2 closing run and No. 11 seed Norte Dame rallied past 14th-seeded Wake Forest 80-77 on Tuesday night in the first round of the Atlantic Coast Conference tournament.

Tied at 77, Wake Forest's Daivien Williamson drove the lane but his floater was blocked by Cormac Ryan, who dribbled the other way to find a trailing Wertz for a winning 3. Wertz celebrated by finding Ryan in the corner for a chest bump before getting mobbed by teammates.

Wertz also made a step-back 3 and Prentiss Hubb added nine points during a 14-0 run to give the Fighting Irish a 77-75 with 1:54 remaining, their first lead since the opening bucket.

The Fighting Irish move on to face sixth-seeded North Carolina, which beat Notre Dame 66-65 in their only regular-season meeting on Jan. 2.

Wertz finished with 16 points, and Juwan Durham had a double-double with 16 points and 10 rebounds for Notre Dame (11-14), which trailed by as many as 16 points in the second half and finished 30-of-58 shooting from the floor. Hubb and Ryan added 14 points apiece. Wertz, Hubb, and Ryan combined for eight of the Irish's 12 3-pointers.