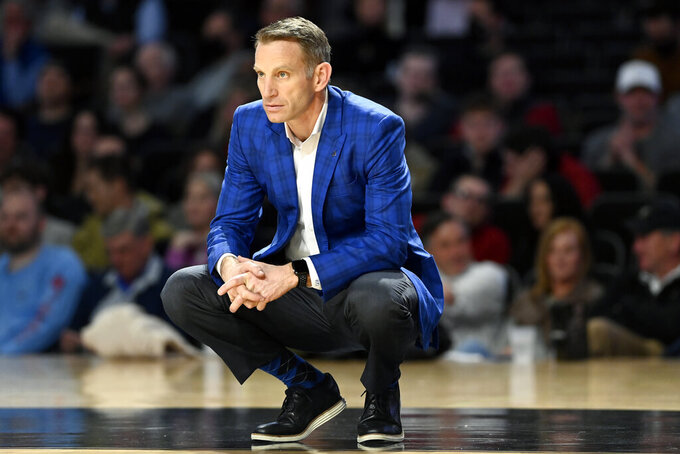 FILE - Alabama head coach Nate Oats watches the action during the first half of an NCAA college basketball game against Vanderbilt on Feb. 22, 2022, in Nashville, Tenn. The 20th-ranked Crimson Tide has talent and depth both returning and incoming, but plenty to improve on from a season that crashed to a halt with a first-round NCAA Tournament exit. (AP Photo/Mark Zaleski, File)

Mike White has an advantage over about a third of the other men's basketball coaches in the SEC this season.

He may be in a new place, but the Georgia coach is at least in the same conference.

That should give White, who moved on from Florida after last season, a little bit more comfort than Lamont Paris, Dennis Gates, Chris Janes, Matt McMahon and Todd Golden. In a unique year of high turnover among the league's coaches, those five will be learning about the SEC on the fly when the season begins in a couple of weeks.

“There are some changes in terms of how we played last year at the University of Florida, of course, and then obviously wholesale changes — two completely different programs,” White acknowledged. "So we'll see.”

There are a lot of reasons for six new coaches in the SEC, but it boils down to a single word: expectations.

The league long known for an almost singular focus on football — mighty Kentucky notwithstanding — simply expects to be good at everything these days, and that includes basketball. Schools are pumping money into their programs, and with that money comes a win-or-else mentality that has led to many coaching changes.

Yet it's also led to league-wide success.

The SEC has five teams in the preseason AP Top 25, tied for the most of any league, and two more are receiving votes. The Wildcats top the list at No. 4, but No. 10 Arkansas has a team coming off of back-to-back Elite Eights, No. 11 Tennessee is loaded again, No. 15 Auburn is coming off its first SEC title in five years and No. 20 Auburn has perhaps the nation's best backcourt in Jahvon Quinerly and Nimari Burnett.

Among those receiving votes are the Gators, where White left plenty of talent in Colin Castleton and Myreon Jones for Golden, who arrives in Gainesville after leading San Francisco to the NCAA Tournament last spring.

“In regards to the turnover, I think it's a little fluky,” Golden said. “Obviously, the coaching in this league has really taken off, I would say over the last seven to eight years, and that’s a big reason as to why they’ve had a lot more success.”

It also makes it harder on the other newcomers, who unlike Golden arrived at schools with mostly bare cupboards. White at Georgia, Paris at South Carolina, Gates at Missouri, Jans at Mississippi State and McMahon at LSU are all facing massive rebuilding projects in a league that has suddenly become very unforgiving.

“There was a time where you had two or three teams representing the SEC. Now you grow that into about eight or nine,” Gates said. “What it says is it’s a tremendous, tremendous conference with great resources.”

The reigning AP national player of the year is back in Kentucky forward Oscar Tshiebwe, who merely averaged 17.4 points and 15.1 boards last season. Tshiebwe had a minor knee procedure and may miss the Wildcats' exhibition game, but coach John Calipari hopes to have him on the floor around the time of the regular-season opener.

"I’ll keep him out longer than he probably should,” Calipari said, “but he’s pretty resilient. We’ll see.”

Some of the top players in the transfer portal landed at SEC schools, highlighted by the arrival of Morehead State's Johni Broome at Auburn and Ohio Valley player of the year KJ Williams following McMahan from Murray State to LSU.

Arkansas landed Ricky Council IV from Wichita State and Jalen Graham from Arizona State, while Alabama's Nate Oates picked off two of the premier transfers in Mark Sears from Ohio and Dominick Welch from St. Bonaventure.

“Need a lot of production out of the new faces,” Oats said this week.

Kentucky landed top-15 prospects Chris Livingston and Cason Wallace, five-star forward Julian Phillips chose Tennessee, McDonald's All-American Brandon Miller signed with Alabama and GG Jackson reclassified to the class of 2022 and ended up at South Carolina. But of all the talented freshmen in the SEC this season, consensus top-five prospect and potential one-and-done guard Nick Smith Jr. will turn the most heads this season for Arkansas.

“He is used to playing with expectations throughout his high school career,” Razorbacks coach Eric Musselman said.

Along with Florida, Texas A&M also received votes in the preseason AP poll after Buzz Williams broke through in Year 3 with an appearance in the SEC title game. Tyrece Radford and Henry Coleman are back to make another run at it.

Kentucky's nonconference schedule is a gauntlet: Michigan State in Indianapolis, at No. 2 Gonzaga, Michigan in London, No. 8 UCLA in New York and visits from Louisville and fifth-ranked Kansas to Rupp Arena.

Other marquee nonconference games include Arkansas heading to No. 5 Baylor; Alabama playing Gonzaga and visiting No. 3 Houston; and Tennessee heading to No. 17 Arizona before playing No. 12 Texas.