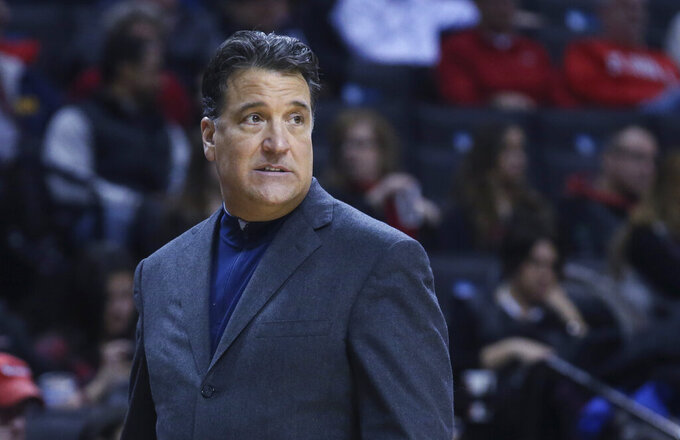 FILE - St. John's coach Steve Lavin walks along the sideline during the first half of the team's NCAA college basketball game against Tulane on Dec. 28, 2014, in New York. Lavin, the former coach at UCLA and St. John's, was hired Wednesday night, April 6, 2022, to take over the program at the University of San Diego. (AP Photo/John Minchillo, File)

SAN DIEGO (AP) — Steve Lavin, an NCAA Tournament regular in 12 seasons as coach at UCLA and St. John's, was hired Wednesday night to take over the struggling program at the University of San Diego.

The 57-year-old Lavin replaces Sam Scholl, who was fired March 6 after the Toreros went 15-16 in a third straight losing season. San Diego has had just four winning seasons and one NCAA Tournament appearance under three coaches since Brad Holland was fired after going 18-14 in 2006-07.

Athletic director Bill McGillis said Lavin had been a candidate since the beginning of the monthlong search process.

“I just think it's a great alignment. I think under his leadership we have a chance to catapult to new heights,” said McGillis, who had dinner with Lavin near campus on Wednesday night.

Lavin has worked for several seasons as a college basketball analyst on television.

“I considered a lot of outstanding coaches but in the end I just felt that he was the best fit for elevating the level of success on the court," McGillis said.

Lavin updated his Twitter bio with “@USDMBB Head Coach” at one point Wednesday evening before deleting that. Shortly after McGillis tweeted confirmation of the hiring, Lavin restored that line.

“I think I told him his Twitter account got hacked,” McGillis joked. “He just decided to subtly share the good news before the rest of us.”