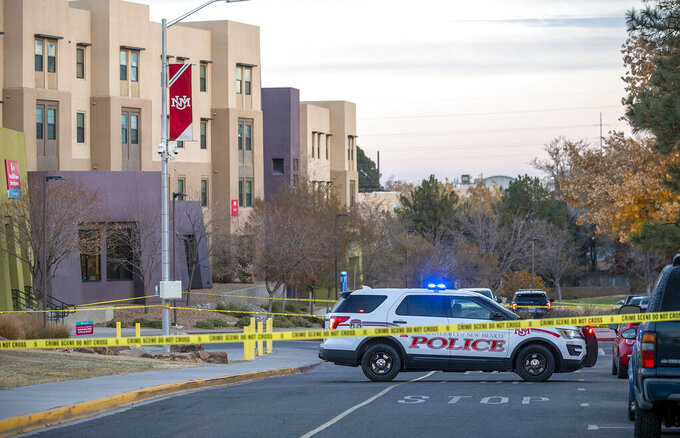 ALBUQUERQUE, N.M. (AP) — A University of New Mexico student was released from jail Wednesday after being accused of plotting with friends to confront a basketball player from a rival university, resulting in the shooting death of one UNM student and the wounding of the player.

A state district judge denied a request by prosecutors to keep Jonathan Smith, 19, in custody pending trial on charges of aggravated battery, conspiracy and tampering with evidence. Smith’s attorney has said his client had no previous criminal record and comes from a good home.

Authorities say the plan for revenge on Mike Peake, the New Mexico State University basketball player, followed a brawl at a college football game earlier this fall. The shooting happened just hours before the scheduled tipoff of a basketball game between the two schools, and authorities say Peake was allegedly lured to the UNM campus in Albuquerque early Saturday.

Police identified Brandon Travis as the University of New Mexico student who was fatally shot and accused of planning the assault on Peake, the starting power forward for the Aggies basketball team.

Court documents state that a 17-year-old female UNM student conspired with Smith, Travis and another young man to get Peake on campus. Once there, the men confronted Peake, and Travis shot him in the leg. Peake returned fire, killing Travis. The teen girl is facing conspiracy charges in juvenile court.

University officials confirmed Wednesday that Peake, who is expected to recover, is still a member of the team. While Peake violated curfew rules and the student code of conduct for taking a gun on the team trip, he has not been charged with a crime.

New Mexico State University officials said during a news conference Wednesday that student athletes who were involved in that previous fight were disciplined, and that officials from both schools have been in talks about how to ensure the safety of students and other fans during rivalry games.

“We are taking these events extremely seriously and we are looking at everything we can and should be able to do to avoid these kinds of things in the future," NMSU Chancellor Dan Arvizu said.

Arvizu was joined by Athletics Director Mario Moccia and Dean of Students Ann Goodman. They all talked about the high expectations for student athletes and the values that are preached by NMSU coaches.

Goodman said the New Mexico rivalry is not unlike many others around the country when it comes to college athletics, and fights that erupt during such games are not always motivated by the rivalry itself but rather something else.

What sparked the fight in October is part of the ongoing investigation. Still, the officials said they have talking with the University of New Mexico about ways to “lower the temperature” so hostility can be avoided during future games between the two schools.

According to data collected by UNM and NMSU authorities, it’s rare for weapons to be found on campus.

At New Mexico State University in Las Cruces, officials said there were no arrests involving weapons in 2021, only one in 2020 and three in 2019. There have been 10 cases of weapons found in student housing at UNM in Albuquerque in the last four years, with only two in 2019 leading to an arrest, citation or summons.