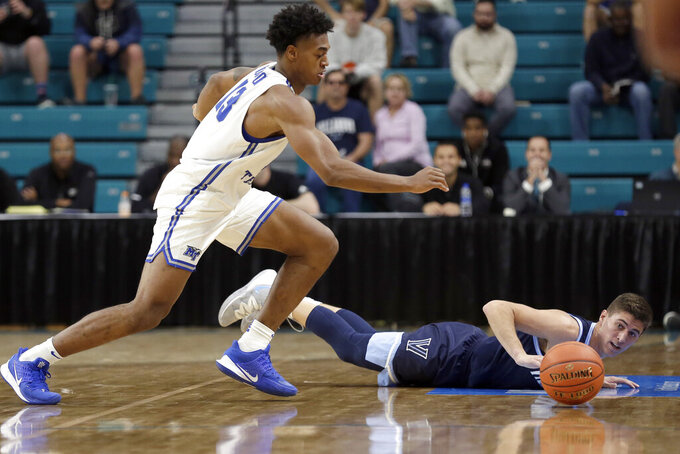 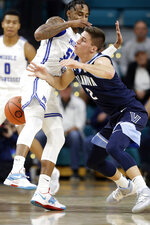 CONWAY, S.C. (AP) — It’s been awhile since No. 17 Villanova shot this well from long range. Cole Swider has never scored like this.

Swider scored a career-high 26 points with six 3-pointers, and the Wildcats routed Middle Tennessee 98-69 on Thursday in the quarterfinals of the Myrtle Beach Invitational.

Collin Gillespie added 16 points and hit four 3s, Justin Moore finished with 15 points and Jeremiah Robinson-Earl had 11 rebounds to help Villanova (3-1) — which never trailed, led by 35 and shot 57% while winning its second straight following a 25-point loss at No. 10 Ohio State.

And yet, another number in the box score caught coach Jay Wright’s eye — Swider’s seven rebounds.

And the Wildcats have plenty of those. They made 18 3s — one shy of the school record, and their most since they also had 18 in a victory over Kansas at the 2018 Final Four.

Eleven of them came during a first-half barrage that pushed the lead well into the 20s. Swider hit his fifth 3 from the corner shortly before the buzzer to put the Wildcats up 53-28 at halftime.

Saddiq Bey then took the lead to 30 with a 3-pointer two minutes into the second half.

Donovan Sims scored 18 points and C.J. Jones had 16 for the Blue Raiders (3-2). Leading scorer Antonio Green, averaging 23.5 points going into the game, finished with four points on 1-of-7 shooting while dealing with foul trouble.

“They’ve got a lot of interchangeable parts, so they were switching just to never let him see space,” McDevitt said.

Villanova: The Wildcats are tough to beat during in-season holiday tournaments, winning six of them in a row, and that 3-point touch got them off to a strong start toward No. 7. Gillespie, in his second game without the mask that protected his broken nose, got plenty of clear looks at the basket. He had four 3s in the first half. “Collin’s had a real tough preseason, so to see him get off like that to start the game was important for our team,” Wright said. “Our whole team looks to him for his energy and they watched what he went through in the preseason so I know they feel great for him.”

Middle Tennessee: The Blue Raiders had no answer for Villanova’s long-range shooting and couldn’t really get their 1-2 punch of Green and Jones started. Jones averages 20 points, but by the time he reached double figures, Middle Tennessee was already trailing by 30.

Bey entered averaging 20.5 points in the Wildcats’ two wins but was held to two points in their lone defeat. He had six points in this one, but Villanova proved it can beat a team resoundingly despite a relatively quiet game from the sophomore.

Villanova freshman Bryan Antoine had nine points in 19 minutes in his college debut. The McDonald’s All-American missed the first three games after right shoulder surgery in May and was medically cleared this week.

Villanova’s previous season high for 3s was 14, set against Ohio on Sunday. … Swider’s prior high-scoring game was 18 against Army in the opener.

Villanova: Plays the Tulane-Mississippi State winner Friday in one semifinal.