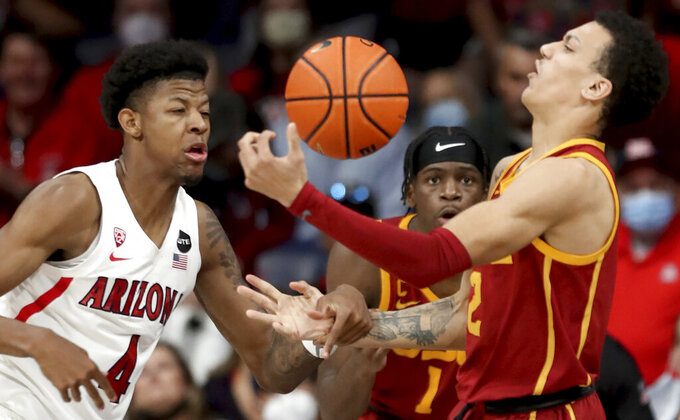 Arizona guard Dalen Terry (4) rips the ball out of the hands of Southern California forward Kobe Johnson (2) in the first half of an NCAA college basketball game in Tucson, Ariz., Saturday, Feb. 5, 2022. (Kelly Presnell/Arizona Daily Star via AP)

TUCSON, Ariz. (AP) — Kerr Kriisa looked like a borderline madman at times during the second half, fist-pumping, flexing his arms, screaming and gesturing toward the home fans, imploring them to get on their feet.

In between the theatrics, Arizona's point guard even found some time to lead his team to another win.

Azuolas Tubelis scored 18 points and grabbed 11 rebounds, Kriisa added 13 points and No. 7 Arizona rallied in the second half for a 72-63 win over No. 19 Southern Cal on Saturday.

Krissa scored all 13 of his points in the second half. It helped him break out of shooting slump that started with a dreadful 0 for 12 shooting performace in a loss to UCLA less than two weeks ago. The 6-foot-3 sophomore said he never lost confidence and credited his resurgence to a little more practice and even some video games.

“If you go through a slump, it's not like I'm going to panic or cry at home,” Kriisa said. “I just take some extra shots, sleep more and play more Fortnite. Just trying to get back on track.”

The Wildcats knocked off another ranked opponent just two days after beating No. 3 UCLA 76-66 in a bounce-back win after losing to the Bruins on the road on Jan. 25. Arizona's 13-0 at home this season and have a 15-game home winning streak in Tucson dating back to last year.

“I think we can win in a lot of ways,” Arizona coach Tommy Lloyd said. “We're a great defensive team. At the end of the day, that's probably our calling card. Hopefully, certain nights you're explosive on offense ... but we're more than comfortable in games like that."

USC went on a 10-0 run midway through the second half to take a 60-54 lead with 6:30 remaining. But Arizona responded quickly with six straight points, including Kriisa's 3-pointer that drew nothing but net to tie it at 60-all less than a minute later.

Lloyd said Kriisa's passion is part of what makes him good. He was 3-of-5 from 3-point range, giving Arizona a lift in a game where offense wasn’t always easy to find.

“This game's meant to be played with passion,” Lloyd said. “That's why he's the perfect point guard for our program.”

Tubelis — who has been hobbled by a sprained ankle over the past few weeks — had his big game despite playing just 25 minutes. The 6-foot-11 sophomore said the injury wasn't a factor on Saturday, especially in front of a rowdy sellout crowd of 14,644 fans.

“When we're playing in that kind of atmosphere, I don't feel it,” Tubelis said.

USC jumped out to an early 10-5 lead but Arizona responded with the next nine points — capped by an alley-oop dunk by Dalen Terry following a perfect pass from Justin Kier. The game stayed tight throughout the first half and USC's Ethan Anderson hit a tough baseline jumper at the buzzer to cut Arizona's lead to 29-28 at the break.

The Trojans were coming off one of their worst offensive performances of the season, overcoming 30% shooting in a 58-53 win over Arizona State on Thursday. It was the first time in 25 years they won a game when shooting so poorly from the field.

USC struggled again offensively for much of the game before improving early in the second half. It didn't last — they cooled off again down the stretch and finished just 34% from the field.

Arizona was playing back-to-back top 20 opponents for the first time in more than three years. Christian Koloko added 10 points and seven rebounds for the Wildcats.

The game got off to a painful start when USC's Boogie Ellis and Arizona's Terry inadvertantly bumped heads in the opening minute.

Both players had to leave the court though each returned later in the first half. The collision was an indicator of what was to come in a very physical game by both teams.

It was a good showing for both Arizona and USC, with each hitting some big shots and showing grittiness with second-half runs.

Both teams are trending toward good things in March, though USC certainly needs to be more efficient offensively.

USC: Hosts Pacific in a non-conference game on Tuesday.