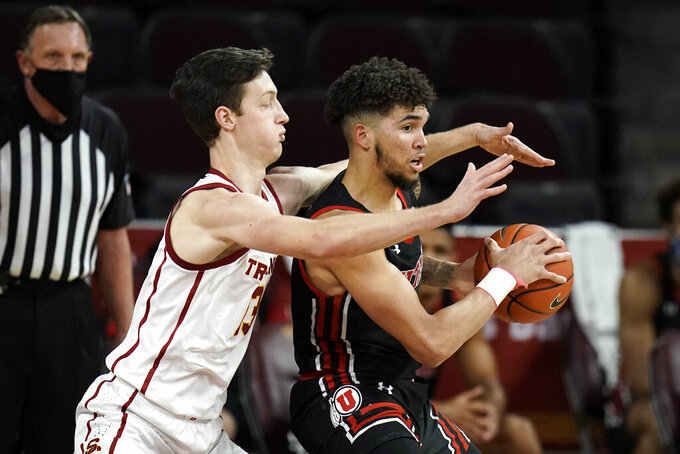 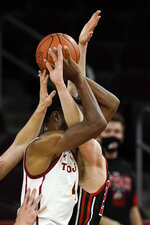 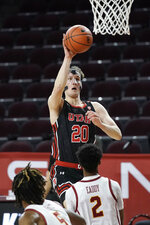 LOS ANGELES (AP) — Tahj Eaddy scored 18 points and Southern California pulled away in the second half to beat Utah 64-46 on Saturday.

The Trojans (6-2, 1-1 Pac-12) earned their first league win of the season after losing to Colorado and having two other Pac-12 games postponed because of COVID-19.

“This is a big steppingstone in the right direction,” said USC's Chevez Goodwin, who had 11 points despite four fouls.

Drew Peterson added 13 points and 11 rebounds for the Trojans. Isaiah White scored 12 points before fouling out.

USC 7-foot freshman standout Evan Mobley was held to three points and five rebounds, the first time in eight games that he failed to score in double figures and grab at least seven rebounds. He did not attempt a field goal while playing 30 minutes.

“He could have forced some shots up but he made the right decisions. They were double-teaming him on the catch. He was passing the ball out of the double team,” USC coach Andy Enfield said of Mobley. “He was out on the perimeter guarding guards, which was new to him. He played a terrific game despite not scoring a lot.”

Utah (4-3, 1-2) was led by Ian Martinez with 10 points, the only Ute in double figures. The Trojans shut down Alfonso Plummer (seven points) and Timmy Allen (five points). Plummer averages 16 points and Allen 15.8 points. The Utes were limited to 28% field-goal shooting.

USC led by 16 points after opening the game on a 22-6 run. The Utes closed to 32-28 at halftime while forcing several of USC's 14 turnovers in the game.

“I was really impressed with our defensive focus. There was a lot of defense that kept us in the ball game,” Utes coach Larry Krystkowiak said. "Our offense is putting too much pressure on our defense against teams of this caliber.”

Utah trailed by four when the Trojans put the game out of reach with an 11-1 run. Eaddy scored on a goaltending call, hit a 3-pointer and made another basket for seven points to extend USC's lead to 55-41.

Peterson's 3-pointer capped a 9-2 spurt that ended the game for USC. The Utes were 4 of 32 from the floor in the second half.

“We tried to challenge every shot and switched one through five on all ball screens,” Enfield said. “Our bigs got out to challenge 3-point shots.”

Utah: It was a lost weekend in Los Angeles. The Utes dropped a two-point decision at UCLA on Friday and now return home for a four-game stand. They're working out issues typical of a team featuring 11 freshmen or sophomores.

USC: The Trojans have played three games, winning two, since returning from a two-week stoppage because of COVID-19. Picked to win the Pac-12, they're facing a tough trip to Arizona next week. They'll have to clean up sloppy play that led to a combined 30 turnovers in their last two games.

Krystkowiak said the Utes have been staying in a hotel for five days and not seeing anyone else around. “It hasn’t been easy for our guys and it’s what we talked about on our second time out,” he said. “Nobody is going to feel sorry for us, we have to go out and make our own breaks.”

USC starting guard Ethan Anderson is progressing in his recovery from a back injury and could return next week.