USC's Enfield: Refs got it wrong on late out-of-bounds call 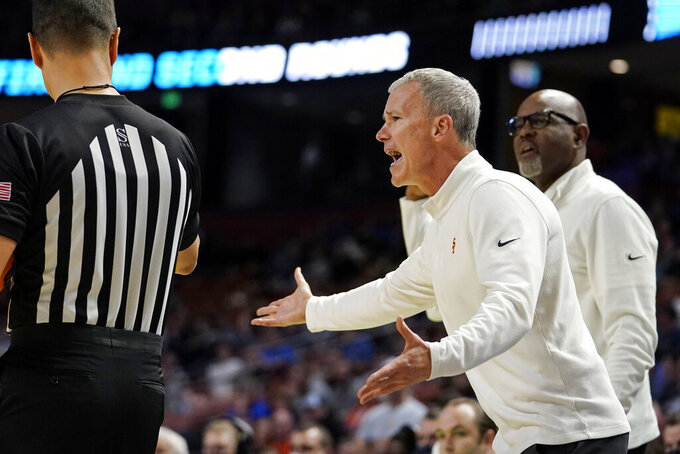 Southern California head coach Andy Enfield reacts to a referee's call during the second half of a college basketball game against Miami in the first round of the NCAA tournament, Friday, March 18, 2022, in Greenville, S.C. (AP Photo/Brynn Anderson)

GREENVILLE, S.C. (AP) — Andy Enfield had no problem with the foul call that sent Miami's Charlie Moore to the line for the winning free throws against Southern California on Friday.

The Trojans' coach did take exception to the officials’ decision to give Miami the ball on an out-of-bounds play with just over two minutes left. Miami, up 59-58 at the time, went on to score the next six points for a 65-58 lead and won 68-66.

“I did think the out of bounds call at 2:05 was the wrong call when they gave the ball to Miami,” Enfield said. “They hit it out off the free-throw miss. It was a one-point game. It should have been our ball, and they gave it back to Miami.

“It was the wrong call,” Enfield added.

Enfield said it was clear to him the ball went off Miami forward Sam Waardenburg and not one of the Trojans.

“I don’t know how you missed that call in a crucial part of the game in the NCAA Tournament,” he said.

The Trojans were able to tie it 66-all on eight straight points by Drew Peterson before Moore’s winning foul shots.

“So when you’re talking about a one-possession game, a one-point game, it’s very disappointing to lose like that,” Enfield said.

Enfield was asked if he received an explanation of the decision.

“I don’t know what was in their gut or their head, but it was just the wrong call,” Enfield said. “It was very clear. Everybody saw it.”

Regarding the foul called on Ethan Anderson that set up Moore's winning free throws with three seconds left, Enfield said it was just part of the game.

“The call was made and unfortunately we were one possession short.” he said.