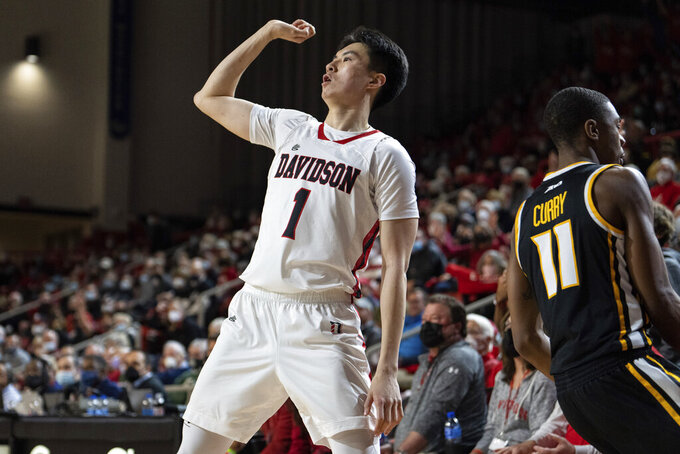 Vince Williams scored 16 points, Mikeal Brown-Jones had a huge block with 2 seconds left and VCU held off a furious rally from No. 25 Davidson to win 70-68 on Wednesday night, snapping the Wildcats’ 15-game winning streak.

“Them being in the top 25 gave us more motivation, and we still had a chip on our shoulder,” Baldwin said.

Davidson (16-3, 6-1) was off to its best start since the 1964-65 season, and its 15 consecutive wins were tied with No. 1 Auburn for the longest streak in the nation. But the Wildcats struggled at times with the Rams' pressure defense and committed 15 turnovers. VCU had eight turnovers.

“This is a really hard place to win in the A-10,” VCU coach Mike Rhoades said. “I'm really proud of our guys.”

Luke Brajkovic had 23 points and 12 rebounds to lead Davidson, which suffered its first loss since falling to New Mexico State in the first round of the Myrtle Beach Invitational on Nov. 18.

Davidson trailed by 15 with 5 1/2 minutes remaining before rallying to cut the lead to one in the final minute.

Brajkovic was fouled and made two free throws make it a four-point game with 2:20 to go. Then, with 1:32 remaining, Davidson's Foster Loyer was fouled on a 3-point attempt as the shot clock was winding down and made three free throws, cutting the lead to one.

After Baldwin missed a driving layup, Davidson had a chance to take the lead but Brajkovic was called for pushing off as he battled for position in the low post with 13.5 seconds left. Baldwin made 1 of 2 free throws, giving the Wildcats another chance.

“I don't think we played particularly well, but I thought we fought exceptionally well,” Davidson coach Bob McKillop said. “We cannot let one loss become two losses. We cannot let a loss disrupt us, nor allow that loss to flavor what has just transpired in the last two months. Many teams have (several) poor performances, and we've had one in two months. And yet we still valiantly fought back and put ourselves in position to win at the end."

It was a battle of conflicting styles.

With a big height advantage, Davidson was content to pound the ball inside to the 6-foot-10 Brajkovic and 6-9 Sam Mennenga. VCU tried to use its speed and athleticism, pressing the Wildcats full-court throughout the game while settling for 3-point shots on the offensive end.

VCU shot 7 of 14 from long range while Davidson just 3 of 14 from beyond the arc.

VCU knocked down 7 of 11 3s in the first half — including three by Jayden Nunn — to take a 37-29 lead at the break. Brajkovic had 14 points in the half, but the Wildcats were 2 of 7 from long distance and Loyer, a 47% 3-point shooter, couldn't find room to shoot over VCU's taller guards. Loyer attempted just one 3-pointer in the game.

South Korea native Hyunjung Lee had 14 points and Loyer added 10 for the Wildcats as the duo combined to go 18 of 18 from the free-throw line to help get Davison back in the game.

“I think to fight back like we did, this shows how resilient we are,” Brajkovic said.

VCU: The Rams moved into a tie for third place in the Atlantic 10 with Dayton and gained a resume-building win.

Davidson: The loss will almost certainly knock the Wildcats out of the Top 25 regardless of what they do on Saturday against La Salle. The Wildcats remain atop the A-10, ahead of George Mason (3-1).