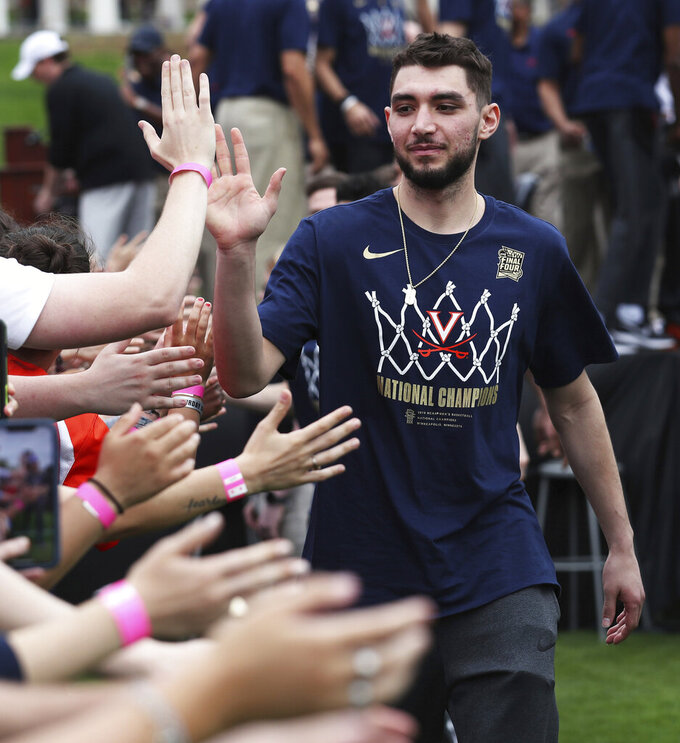 The crowd, estimated at 21,000 on the school's Twitter account, filled one side of Scott Stadium five days after the Cavaliers beat Texas Tech 85-77 in overtime to win the title.

"This is more than we expected," coach Tony Bennett said of the crowd after he and the team emerged from a tunnel to wild cheering.

Bennett compared the celebration to one for Clemson's national champion football team during a visit for a basketball game. He said he wondered if he'd ever see the same thing at Virginia.

"That day is now," he yelled, pumping his fist in the air. The Cavaliers "are part of one of the greatest stories that I've ever seen written and it will be told over and over again," he said.

Virginia last year became the first No. 1 seed to lose to a No. 16 seed in the NCAA Tournament, and the burden of that loss followed them throughout this season. It heightened during their opening round game in this year's tournament, again as a No. 1 seed, against No. 16 Gardner-Webb. Virginia trailed by as many as 14, but rebounded in the second half and won by 15. Their final three victories in the tournament all were nail-biters.

"It had been a redemption story for the ages," Dave Koehn, the Cavaliers' play-by-play announcer, told the crowd.

Bennett said the team rallied around the idea of "united pursuit" all season.

"I can't help but think this is a united celebration," he said.

Carla Williams, Virginia's athletic director, said she couldn't pick a moment that highlights this year because "I really can't think about this season without thinking about how last year ended."

Koehn interviewed the most prominent Cavaliers, and asked junior guard Ty Jerome how he wants to be remembered. Jerome is one of three players considering leaving school early to pursue an NBA career. When Jerome paused after hearing the question, the crowd began chanting "One more year, one more year."

The hour-long celebration featured several highlight videos, and before it was over, Virginia redshirt freshman guard Frankie Badocchi played "One Shining Moment" on a keyboard set up on the stage.