Virginia's depth helping its rapid climb in the AP Top 25 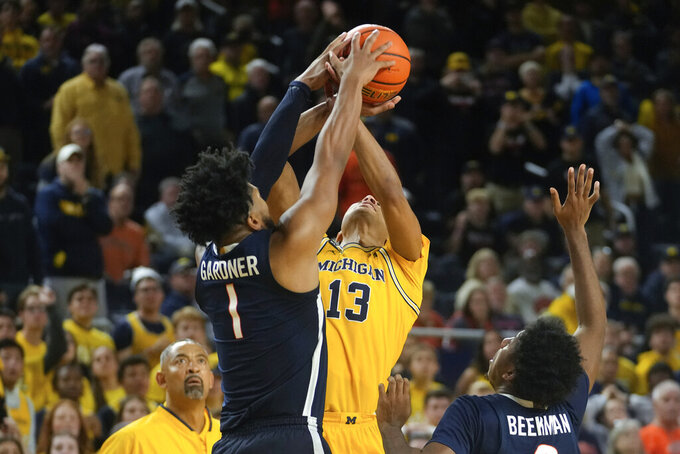 The starting five is the same, but that is where comparisons between the Virginia team that has climbed to No. 3 in the AP Top 25 and last year's NIT quarterfinalists ends.

Yes, one more year together and a trip to Italy has made the first five significantly better, but part of the credit for that surely goes to another group: the reinforcements. They've helped the Cavaliers (6-0) already knock off No. 6 Baylor, No. 16 Illinois and Michigan.

Virginia has scored 70 points or more in its first six game for the first time since the 2003-04 season, and coach Tony Bennett said it was the offense — and not UVA's signature relentless defense — that saved them in a 70-68 victory this week at Michigan in the ACC/Bg Ten Challenge.

“Our offense kind of kept us in it in the first half,” Bennett said, before the team put it all together, erasing an 11-point halftime deficit to disappoint a raucous Wolverines crowd.

Reece Beekman was the offensive catalyst, scoring 15 of his 18 points before halftime, but four others joined him in double figures, including Jayden Gardner. His foul-line jumper with 39.9 seconds left provided the last of his 11 points, and the winning margin.

“We’ve got a lot of capable scorers and we’re just gonna keep playing together. And we’re playing very unselfish basketball right now," Gardner said after scoring 24 against Maryland Eastern Shore. He went into the game with 31 points through four games.

“He’s not the most jumping type of guy, but he’s got so much power,” Hawks coach Jason Crafton said of Gardner, an East Carolina transfer with 2,068 career points. “That low center of gravity and the flexibility that he has to be able to get under people and hold his position is elite. When he wants the ball at a certain spot, he can get it there.”

The leader remains guard Kihei Clark, who already has a place in Virginia history, having retreived a loose ball and fed Mamadi Diakite for a jumper that sent the Cavs' Elite Eight game against Purdue into overtime on the way to winning the 2019 national championship.

Newcomers Ben Vander Plas, a transfer from Ohio, and freshman Isaac McKneely have given Bennett more options, and more scoring power than a year ago.

As a junior, Vander Plas had 17 points for No. 13 seed Ohio when the Bobcats upset Virginia 62-58 in the first round of the 2021 NCAA Tournament.

He scored seven straight in the second half against the Wolverines, twice scoring inside and then swishing a 3-pointer while trying to slow down bruising big man Hunter Dickinson.

“Ben, yeah. Just his poise and compsure in the post, took advantage of some mismatches and he really gave us a great lift,” Bennett said. Vander Plas is the son of a teammate of Bennett's at Green Bay, and his first name is a tribute to Bennett's father, Dick.

“He was standing in front of our bench. I’m like, `Listen, we’re not helping off him,'” Monmouth coach King Rice said he told his team, pointing at McKneely, a two-time player of the year in West Virginia. “And he kind of looked at me and I said, `Yeah, you, because you make all of them,' and he started laughing.”

Ryan Dunn also made quite the impression on Rice in his first collegiate appearance, scoring 13 points with six rebounds and three blocks in almost 27 minutes.

“I was in the building when De’Andre Hunter came off the bench and had a breakout game,” Rice said of Hunter, now with the NBA's Atlanta Hawks. "Dunn reminds me a lot of Hunter, and you can tell he’s young. But when he grows into that body with that skill set, he’ll be giving people problems for a long, long time.”

“A good schedule for sure and it tests you, it kind of shows you, win or lose, you see where you’ve got some holes," Bennett said.

So far, the Cavaliers have been able to fill them all.