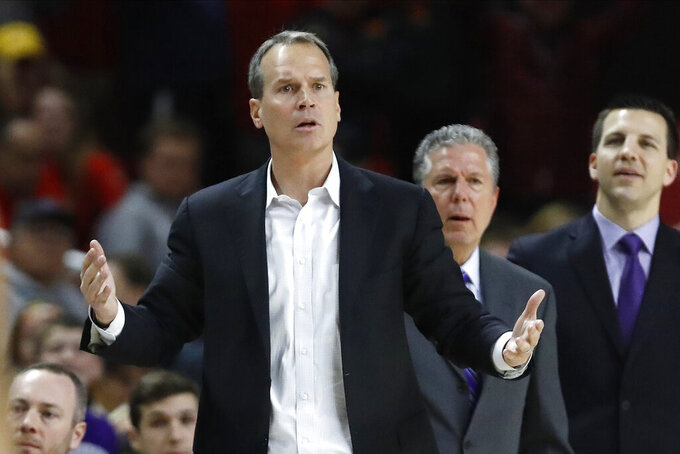 FILE - In this Feb. 18, 2020, file photo, Northwestern head coach Chris Collins reacts during the second half of an NCAA college basketball game against Maryland in College Park, Md. The Wildcats come into their eighth year under Collins looking to get themselves back on the path they appeared to be headed just a few years ago. (AP Photo/Julio Cortez, File)

Northwestern has come a long way the past few years, just not in the right direction.

The Wildcats head into their eighth season under coach Chris Collins looking to get themselves back on the path they appeared to be headed not too long ago.

Northwestern went 8-23 overall and 3-17 in the Big Ten in its third straight losing season since the 2016-17 team became the first in the program's history to play in the NCAA Tournament. Those Wildcats banished the big albatross hanging over the school that hosted the inaugural championship game.

But it's been a steep decline since then.

Northwestern spent the following season playing in suburban Rosemont, about 10 miles from campus, while its home at Welsh-Ryan Arena underwent a massive renovation. And the Wildcats haven't been able to regain the momentum they had when they beat Vanderbilt in the NCAAs before getting knocked out of the tournament by Gonzaga.

The Wildcats are a combined 36-59 — 13-45 in Big Ten play — the past three years. And they really bottomed out last season. Northwestern lost nonconference home games to Merrimack and Radford in the early going and another at home to Hartford in December during a 1-17 stretch.

It all added up to this: Northwestern finished with its worst overall record since the 1999-2000 team went 5-25 while losing all 16 conference games. The eight wins and three conference victories were the fewest for the Wildcats since the 2007-08 season, when they went 8-22 and 1-17.

Northwestern is scheduled to open the season against South Carolina in Kansas City on Nov. 28.

Miller Kopp ranked among the Big Ten's best shooters last season playing for a team that ranked last in the Big Ten in scoring. And the Wildcats will need more of that from the junior. The 6-foot-7 Kopp averaged a team-leading 13.1 points and shot 39.6% on 3-pointers — third in the conference.

Guard Boo Buie figures to serve as Northwestern's primary playmaker after establishing himself as one of the Big Ten's top newcomers as a freshman. He averaged 10.3 points last season, though he'll need to improve his accuracy. Buie shot 37.6% overall while making just 31 of 110 3-pointers.

Chase Audige, who sat out last season after transferring from William & Mary, is eligible to play. The 6-foot-4 guard averaged 9.6 points, shot 37% on 3's and was selected to the Colonial Athletic Association’s All-Rookie Team two years ago. Freshman Ty Berry, a highly touted guard from Newton, Kansas, could also join the backcourt rotation.

Northwestern opens the season against the Gamecocks in the Hall of Fame Classic in Kansas City on Nov. 28 and will play TCU or Tulsa the following day. The Wildcats also host Pittsburgh on Dec. 9 in a matchup that pits Collins against his Duke teammate Jeff Capel. The two served together as coaches with USA Basketball and as assistants at Duke from 2011 to 2013.

Beyond that, the schedule is a mystery because of the pandemic.