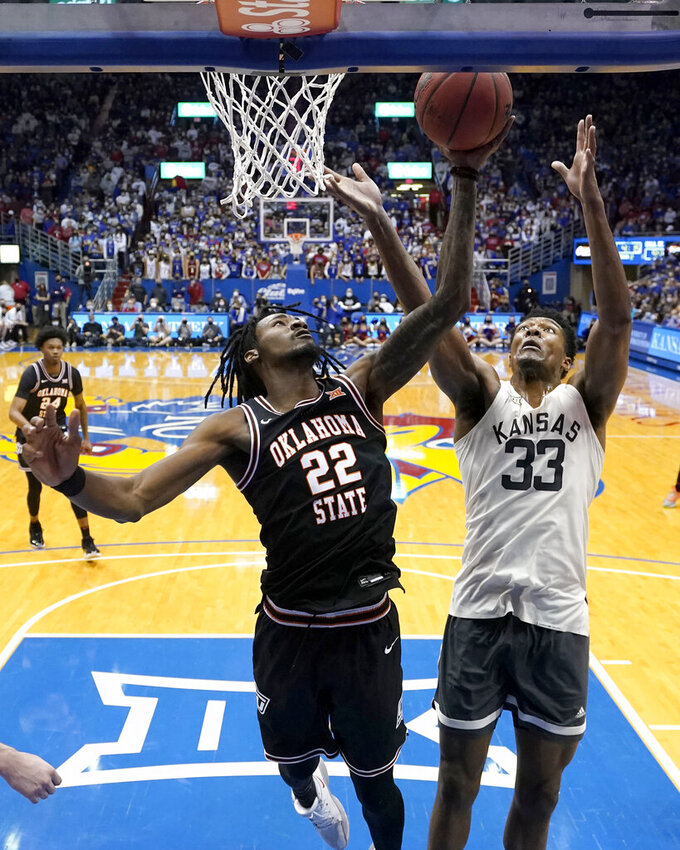 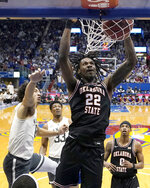 Kansas, which wore throwback jerseys from the 1921-22 season, the year the Jayhawks won their first Helms Foundation national championship, pulled away late in the first half and never was threatened in the second half.

“It was nice not having to sweat,” Kansas coach Bill Self said. “I don’t think we played great, by any stretch, but I thought we were pretty good. We weren’t very good the first 12 minutes.”

Kansas had been struggling to put opponents away recently. With one exception, an 83-59 victory over defending champion Baylor, the Jayhawks had five single-digit wins and two losses in their last eight games.

Joining Agbaji in double figures for Kansas (21-4, 10-2 Big 12) was Christian Braun with 16 points, Dajuan Harris and David McCormack with 12 points each, and Jalen Wilson with 11. McCormack also had 12 rebounds for his sixth double-double of the season.

“I thought he was great tonight,” Self said of Agbaji. And the coach said he wasn’t alone.

“We had some individuals who played pretty well,” Self added. “The ball definitely moved well the first 10 or 12 minutes of the second half. That’s about the best we’ve looked offensively in a while.”

Carrying a 10-point halftime lead, Kansas scored the first four points of the second half and the lead never dipped to less than double digits the rest of the game. The lead reached 20 points when Braun hit two free throws with 13:36 left in the half. By the midway point of the second half, the lead was 26.

Still, Self has something to use for motivation. The Jayhawks missed 16 of their last 17 shots.

“That wasn’t a good finish at all,” he said. “But I would have taken a 14-point win before the game all day long.”

Harris said Self wasn’t too happy with the finish.

“Coach was really mad because we didn’t close the game out really good,” he said. “We were up 25 or so. We’ve got to a better job at the end. If we do that, keep sharing the ball, playing good defense, we’ll be in good shape.”

Oklahoma State: The Cowboys are playing out the string since they are not eligible for postseason play.

Kansas: The Jayhawks won their 10th league game for the 28th straight season, the longest active streak in the NCAA.