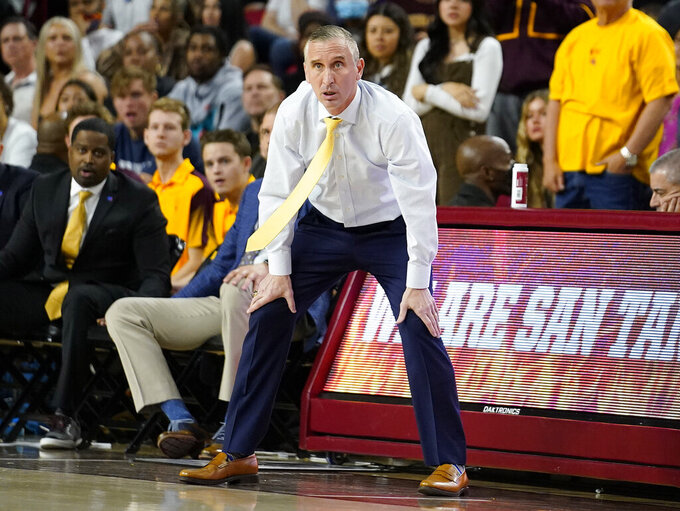 FILE - Arizona State head coach Bobby Hurley watches during an NCAA college basketball game against Stanford, Saturday, March 5, 2022, in Tempe, Ariz. Hurley had built Arizona State into a contender, taking the program to the cusp of a third straight NCAA Tournament in 2020. The pandemic cut that bid short and the Sun Devils haven't been the same since. That could change this season, a pivotal one for Hurley's tenure in the desert.(AP Photo/Darryl Webb, File)

TEMPE, Ariz. (AP) — Bobby Hurley had built Arizona State into a contender, taking the program to the cusp of a third straight NCAA Tournament in 2020. The pandemic cut that bid short and the Sun Devils haven't been the same since.

That could change this season, a pivotal one for Hurley's tenure in the desert.

Adding key transfers to a solid core of returning players, Arizona State has the type of roster that could earn the Sun Devils their first NCAA Tournament berth since 2019.

“We have a lot to prove,” Hurley said. “They read the magazines, they see the projections and they don’t see their names mentioned .... It’s probably justified, but I think there’s been an edge to what we’ve been doing and hopefully that carries over and continues.”

The Sun Devils labored through a start-and-stop 2020-21 season and never could get untracked last year. The 14-17 finish and second straight NCAA Tournament-less season put pressure on Hurley to turn things around.

Facing what could be an NCAA-or-bust season, the fiery coach restocked his roster with veteran players, size in the front court and a deep pool of perimeter shooters.

Arizona State got a huge pickup with the transfer of pass-first point guard Frankie Collins from Michigan. The addition of brothers Desmond (Nevada) and Devan (Auburn) Cambridge gives Hurley veteran leadership and some of the perimeter depth he's missed the past couple of seasons.

Warren Washington, a 7-foot Nevada transfer, gives the Sun Devils heft inside at both ends of the floor.

The additions give Hurley perhaps the deepest roster he's had in eight seasons here.

“We’re extremely deep, especially on the perimeter, and I’d be comfortable playing a number of guys at those spots,” Hurley said.

Bagley was part of one of Arizona State's best recruiting classes in 2020, projected to be one of the best players in the Pac-12, if not the country.

The 6-foot-8 forward has yet to leave much of an imprint on the program, bothered as he was by a lingering knee injury that limited him to 12 games as a freshman, three last year.

Bagley is a good perimeter shooter, particularly for his size, a strong rebounder and a good defender. Having him for an entire season would be a huge boost for the Sun Devils.

“If he has a healthy year and just plays the way we know he can play, you might not even see him here next year because he'll be in the NBA,” Collins said.

One piece that's been missing at Arizona State has been a true point guard — an irony given Hurley is the NCAA's all-time assists leader.

That will change with Collins.

A four-star recruit out of high school, Collins hoped to have an immediate impact at Michigan, but he had a hard time getting significant playing time on a deep roster.

The athletic 6-1 sophomore will get plenty of chances in Hurley's system and plenty of options to set up players who can shoot.

“He’s probably the best I’ve had being a pure point guard and just getting others involved,” Hurley said. “I know the guys love being on his team because he finds people and he’s thinking about playing like a point guard.”

Arizona State opens the season at home against Tarelton State on Nov. 7 and has some tough early tests in nonconference.

The Sun Devils play Texas Southern in Houston, then face Virginia Commonwealth in the Legends Classic, with also includes Michigan and Pittsburgh. Arizona State also has nonconference games at SMU, against Creighton in Las Vegas and at San Francisco, which is coming off its first NCAA Tournament since 1998.