Arizona State may return to Guard U with loaded back court 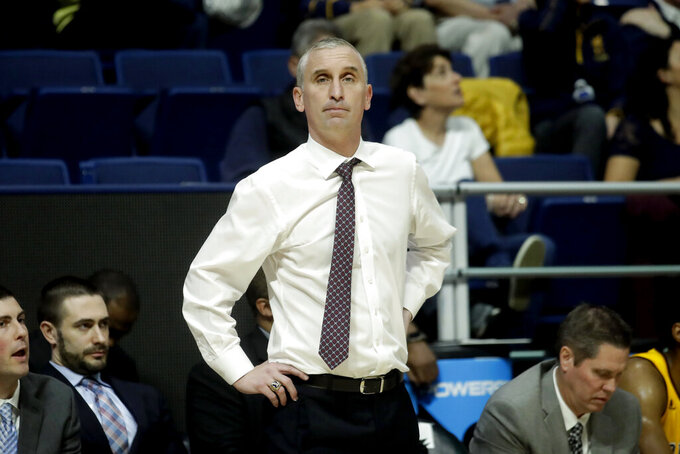 FILE - In this Feb. 16, 2020, file photo, Arizona State head coach Bobby Hurley looks on during an NCAA college basketball game against California in Berkeley, Calif. Hurley recruited like few previous coaches have at Arizona State through his first five seasons in the desert. His latest class, possibly the best in program history, has the Sun Devils in position for a run at a Pac-12 title and a third straight trip to the NCAA Tournament for the first time in 57 years. (AP Photo/Jeff Chiu, File)

TEMPE, Ariz. (AP) — Bobby Hurley recruited like few previous coaches have at Arizona State through his first five seasons in the desert.

His latest class, possibly the best in program history, has the Sun Devils in position for a run at a Pac-12 title and a third straight trip to the NCAA Tournament for the first time in 57 years.

Topped by five-star wing Josh Christopher, No. 18 Arizona State's stellar 2020 recruiting class joins a deep, talented roster that could be reminiscent of the Guard U team that went to the 2018 NCAA Tournament.

“As a coach, I don’t know if I’ve had more enthusiasm, have been more hopeful that nothing derails the season,” Hurley said. “I’ve just got a ton of confidence about what I’ve been watching and how the team is coming together.”

This season's Sun Devils could mark a return of Guard U.

The 6-foot-5 Christopher is Arizona State's highest-rated recruit ever and will join seniors Remy Martin and Alonzo Verge Jr., who both opted to return after testing the NBA waters.

Jaelen House, son of former NBA player and Arizona State all-time leading scorer Eddie House, also is back and so is Christopher's brother Caleb, who's recovering from thumb surgery.

In case that wasn't enough, Hurley brought in transfer guards Holland Woods from Portland State and Ohio State's Luther Muhammad, who will push the rest of the guards in practice while redshirting.

“I’m already telling you that I got a lot of talent in the gym and these guys are really good players,” Hurley said. “It’s going to be our job to continue to build that environment, to create it, to continue to reinforce it, so that we’re putting ourselves in the best position to have a terrific year. A year that really the ceiling is limitless for us.”

The Sun Devils got huge news when Martin decided to return for his senior season. An unquestioned leader, he plays with a tenacity and enthusiasm that's contagious to the rest of the team.

The 6-foot guard is the Pac-12's leading scorer after averaging 19.1 points per game last season. He also averaged 3.1 assists and led Arizona State with 47 steals.

Martin is on multiple preseason watch lists, including the Bob Cousy Award for the nation's top point guard.

Taeshon Cherry, Kimani Lawrence and Jalen Graham return and the Sun Devils could get a big boost from Marcus Bagley. The 6-8 brother of Sacramento Kings big man Marvin Bagley III is a top-30 recruit and could end up being one of the conference's best freshmen.

The Sun Devils also could get a lift from Ukrainian big man Pavlo Dziuba, who averaged 13.8 points and 9.3 rebounds in the 2019 FIBA European Championship Division B.

Verge's decision to return after initially declaring for the NBA is another massive boost for the Sun Devils.

The 6-2 guard scored in bunches last season after transferring from a junior college, including a 43-point game against Saint Mary's, fourth-highest in program history.

Verge was Arizona State's second-leading scorer last season with 14.6 points per game and his 16.8 points coming off the bench led the nation.

The Pac-12 opted for a 20-game conference season during the pandemic, a first, and Arizona State will open at California on Dec. 3.

The Sun Devils are slated to play in the Empire Classic Nov. 25-26 in Connecticut with Baylor, Villanova and Boston College.

Hurley and his staff are still working through previous contracts and virus testing protocols to fill out the rest of the Sun Devils' nonconference schedule.