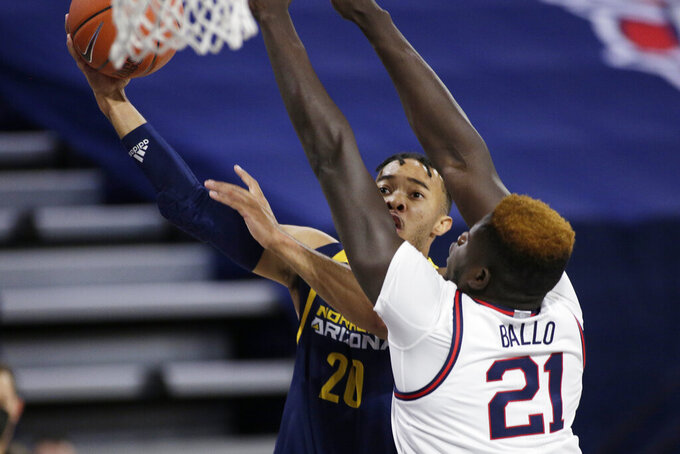 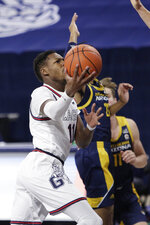 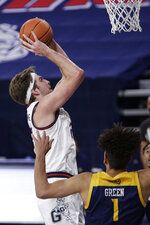 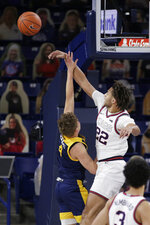 SPOKANE, Wash. (AP) — Veteran guard Joel Ayayi hasn't been putting up big numbers for top-ranked Gonzaga this season, but that changed in an 88-58 win over Northern Arizona on Monday night.

Ayayi opened the scoring with a 3-pointer and finished with 17 points and 10 rebounds.

``I think he's been turning down a lot of shots in other games,'' coach Mark Few said. ``We told him we needed him to take shots. He's a more-than-capable 3-point shooter.''

Ayayi went 6 of 8 from the field and 4 for 5 from 3-point range as the Zags routed the Lumberjacks.

``We played with pretty good energy tonight, and sustained it better than against Northwestern State,'' Few said.

Cameron Shelton scored 20 points and grabbed nine rebounds for Northern Arizona (1-6), which was undone by 35% shooting. Jay Green had 12 points.

Gonzaga used to play the Lumberjacks regularly when both were in the Big Sky Conference, but this was only their second meeting since 1979.

Freshman star Jalen Suggs did not play for Gonzaga due to a right leg injury, the team said.

The Zags didn't need him.

Ayayi scored nine points as Gonzaga jumped to a 28-8 lead after eight minutes. The Zags made 12 of their first 16 shots.

Gonzaga pushed the lead to 36-14 with just under seven minutes left in the first half, dominating the Lumberjacks in the paint 20-8.

Northern Arizona was hampered by 22.9% shooting, making just eight of 35 shots. Green had 10 points at the break for the Lumberjacks.

Gonzaga opened the second half with a 14-4 run to take a 65-27 lead with 14 minutes left. The Zags sent in their bench players after that.

``I told our guys in the locker room after the game that there is no such thing as moral victories, but these are big-picture games,'' he said. ``We don’t want to shy away from any competition, and Gonzaga is really good.

``You play these games to be great in your conference and we look forward to Thursday and Saturday (at Idaho).''

``He only had eight points and Jay was locked up on him,″ Burcar said.

The Zags were coming off a 98-75 win Saturday over then-No. 16 Virginia in Fort Worth, Texas. That gave them a poll-record four wins over ranked teams in their first seven games. They do not have another currently ranked team on their schedule, and have a good chance to extend their seven-week stay at No. 1. It's the longest stint in program history.

Few said Suggs hurt his leg in the Virginia game and it started to bother him on the plane ride home. ``We’ll see how he does in warmup and make a call tomorrow (on whether he plays against Dixie State),'' Few said.

Northern Arizona: The Lumberjacks were coming off their first win of the season at Denver. They are led by Shelton, who averages 19.7 points per game to lead the Big Sky Conference.

Gonzaga: Kispert was selected the West Coast Conference player of the week after scoring 77 points, including a career-high 32 against Virginia, in three victories. That bumped his season average to a team-high 22.4 points per outing. Meanwhile, Suggs was the WCC freshman of the week for the third time. He totaled 39 points, 20 rebounds, 18 assists and eight steals in three games.

Gonzaga hosts Dixie State, which is in its first season of Division I basketball, on Tuesday night. Ayayi said it was silly to think playing back-to-back games is tiring. ``We just want to play basketball,'' he said.