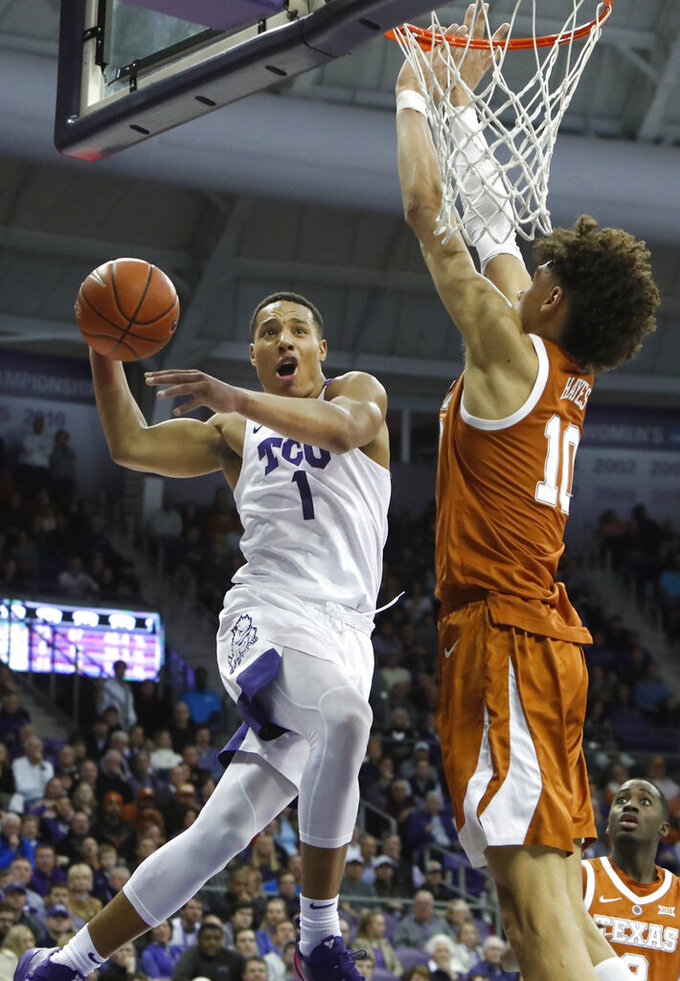 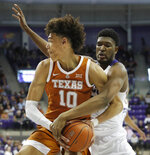 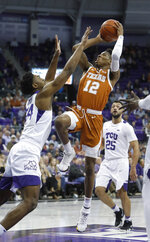 FORT WORTH, Texas (AP) — Desmond Bane and the TCU Horned Frogs have figured out the home formula in the Big 12. Now it's time to work on the road part.

Bane scored 17 points, Kouat Noi had his first career double-double with 15 points and 11 rebounds after missing a game with an illness and TCU beat Texas 65-61 on Wednesday night.

Freshman Kevin Samuel matched his season high with 13 rebounds as the Horned Frogs (14-4, 3-3) won their seventh straight Big 12 home game going back to last season. It's the longest home conference winning streak in 18 years for TCU, which is 0-3 on the road in league play.

"If we want to do what we want to do, it's going to be very important," Bane, who had seven rebounds, said of getting road victories. "Going into these road environments, it's tough. But I'm sure down the road we're going to be able to get some wins on the road."

Noi secured his first double-double with his 10th rebound on the offensive end with TCU ahead by two with less than six minutes remaining, leading to a pair of free throws from JD Miller.

Bane pushed the lead to eight at 62-54 with two nifty layups, including a sprawling reverse that glanced high off the glass and energized a late-arriving sellout crowd because of an early tipoff.

Kerwin Roach II scored 15 points for the Longhorns (11-8, 3-4), who couldn't follow up on a home win over then-No. 20 Oklahoma and dropped back below .500 in league play. Freshman Jaxson Hayes had a season-high five blocks for the second straight game.

Texas was down 12 early in the second half and trailed by eight with less than four minutes remaining yet still had a chance to tie down 64-61 in the final seconds after seldom-used Lat Mayen missed a free throw.

Elijah Mitrou-Long missed badly on a desperation 3-point try with time running out after the Horned Frogs disrupted the Longhorns' attempt to get a good look at a 3 by using two fouls they had to give without putting Texas in the bonus.

"They've got all those fouls to give, and that obviously challenged what we were trying to do," Texas coach Shaka Smart said. "We still need to get a better shot than that."

Miller scored 11 for TCU while Courtney Ramey and Hayes had 10 points apiece for Texas. Dylan Osetkowski finished with nine points and 10 rebounds for the Longhorns.

Texas: The Longhorns did well to hang around when it appeared TCU would cruise in the second half. But the bottom line is Texas hasn't been able to build on the momentum of a league-opening blowout victory at Kansas State, which is now the Big 12 co-leader.

TCU: The Horned Frogs' last home win was their biggest in the Big 12 in seven seasons in the conference, a 31-point blowout of West Virginia. Coach Jamie Dixon isn't overly concerned about finding a way to win on the road in league play. Two of the road losses are to Kansas State and No. 9 Kansas, which currently shares the lead with the Wildcats.

"We've been right there and we've played the toughest of the tough," Dixon said. "We're going to get better. In no way do I think we're the team we're going to be."

Noi's illness kept him out of TCU's lowest-scoring game of the season, a 65-55 loss to Kansas State. Two games before that, he scored a career-high 30 in a two-point loss at Oklahoma. His 11 rebounds were a career high.

Both teams are in the Big 12-SEC Challenge on Saturday. Texas goes to Georgia, and TCU is home against Florida.