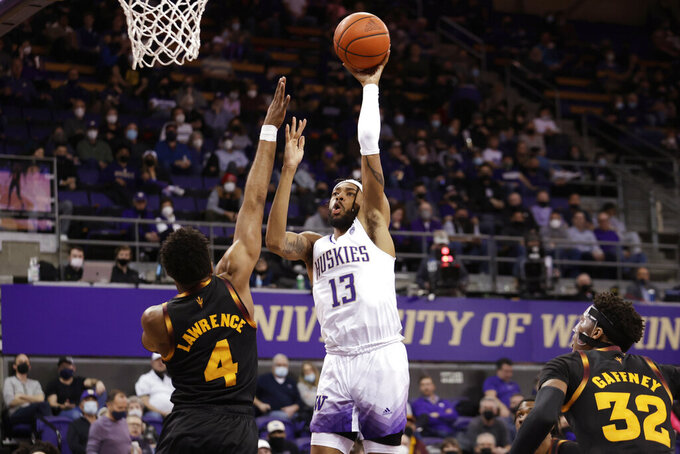 The Huskies led by as many as 20 points in the first half before the Sun Devils got back within seven and then raced away again.

P.J. Fuller moved into the start lineup for Daejon Davis, who injured a shoulder last weekend and scored 16 points for the Huskies (13-9, 8-4 Pac-12 Conference), who have won seven of nine to move into fourth place. Emmitt Matthews Jr., scored 15 and Cole Bajema had 12 off the bench.

The Sun Devils were coming off a stretch of playing five ranked teams in 14 days, only pulling out an 87-84 win over UCLA in triple overtime. The four losses were closer than this game and ASU never made the Huskies uncomfortable.

Arizona State had three 3-pointers and Lawrence had consecutive baskets for a 13-1 run that cut the deficit to 40-32 before a dunk by Nate Roberts just before the half put UW up 42-32.

The Sun Devils opened the game 4 of 21 with seven-straight misses behind the arc before going 9 of 12, including three 3s.

Baskets by Lawrence and Graham had ASU within seven twice early in the second half. The Huskies responded with seven-straight, capped by Bajema's three-point play that made it 61-45, and the lead was in double figures for the last 14:47.

No. 4 Arizona visits Washington on Saturday when Arizona State plays at Washington State.