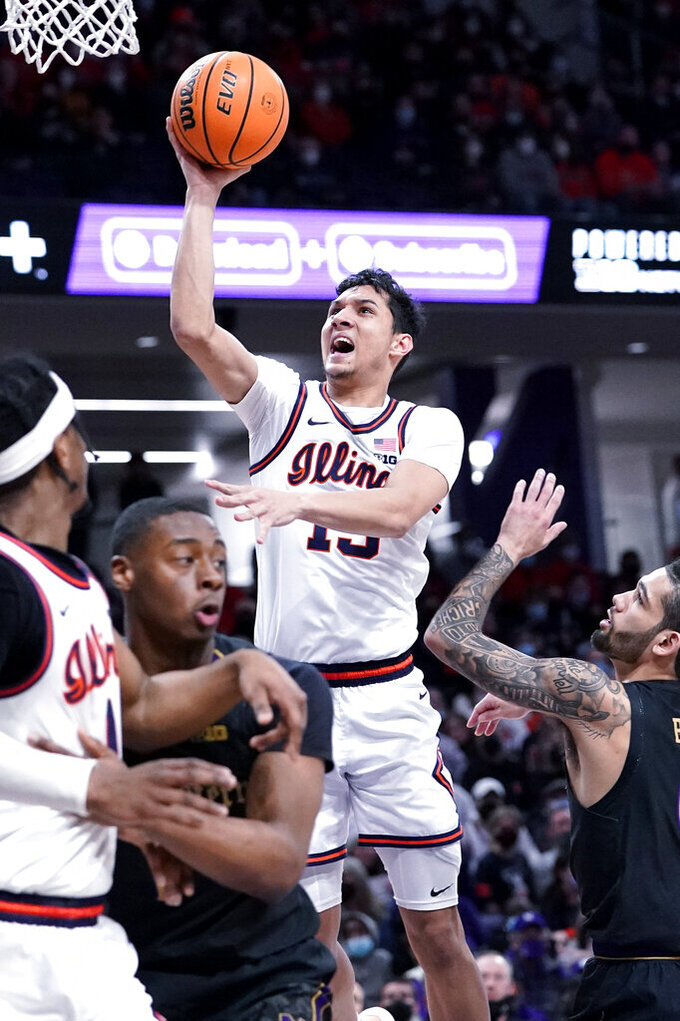 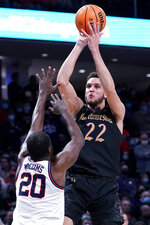 EVANSTON, Ill. (AP) — Kofi Cockburn returned from a concussion and scored 22 points and grabbed nine rebounds to lead No. 24 Illinois to a 59-56 victory over Northwestern on Saturday.

Cockburn was effective, hitting 10 of 17 shots, but his teammates combined for a dismal 12-of-34 shooting clip, allowing the Wildcats to hang around despite going 20 of 56 from the field and 6 of 18 from 3-point range.

The 7-foot center was happy to be back on the court after missing the Illini’s last two games, against Maryland and Michigan State. He sustained the concussion in a double-overtime loss to Purdue on Jan. 17.

“I haven’t missed a game in three years due to injury or any other issues other than the (three-game suspension in November),” Cockburn said. “Just not knowing what it feels like, not knowing how to handle it, it was really tough for me.”

Northwestern took its first lead on a 3 from Ty Berry with 14:35 to play. The Wildcats worked their way to a six-point cushion on Elyjah Williams’ three-point play with 8:09 to play, but Illinois (15-5, 8-2 Big Ten) turned to Cockburn down the stretch and he scored 14 points in the second half, going 6 of 9 from the field.

Cockburn tied the game with a short bucket with 2:25 to play. After a stop, he went up for another layup and missed, but Illini guard Da’Monte Williams’ follow dunk gave Illinois a 55-53 lead with 1:34 to play.

“I knew they were going to double Kofi or potentially (have) everybody be in the paint on him,” Williams said. “That was one of my chances to offensive rebound, which we needed, and I was able to pull through for us.”

The Wildcats made just 4 of their last 11 shots, and Illinois went 4 of 6 at the free throw line to close out the game.

No other Illinois players reached double figures, as Alfonso Plummer went 2 of 6 to finish with nine points.

“We’ve got to play a little bit quicker,” Illinois coach Brad Underwood said. “We’ve got to take our opportunities when they’re there in transition. Second half was a pretty pointed effort to try and get the ball inside to Kofi as often as we could.”

Pete Nance led Northwestern (9-10, 2-8 Big Ten) with 21 points on 8-of-15 shooting to go along with five rebounds, while Boo Buie added nine points and Berry finished with eight points.

The Wildcats struggled offensively, particularly in the first half, going 6 of 26 (23%) from the floor. The Illini returned the favor though, going 1 of 8 over the last five minutes of the half to take a 24-19 lead into the break.

Illinois: The Illini have now won their last seven meetings with the Wildcats, dating back to an 81-76 win in 2019. Star guard Andre Curbelo missed his second-straight game due to COVID-19 safety protocols, but Cockburn’s return gives Illinois a boost ahead of a marquee matchup against Wisconsin and road games at Indiana and Purdue. The victory keeps Illinois atop the Big Ten standings, with Wisconsin and Michigan State both a half-game behind.

Northwestern: The Wildcats are trending toward the bottom of the Big Ten after dropping their last four games. Northwestern proved it can threaten the league’s frontrunners with a two-point win at Michigan State on Jan. 15, but it hasn’t had enough playmaking beyond Nance and Buie to win consistently. Matchups against Rutgers and last-place Nebraska next week present an opportunity to gain some momentum.

Illinois: Hosts No. 11 Wisconsin on Wednesday.