Flyin' high: No. 6 Dayton having best season in half-century 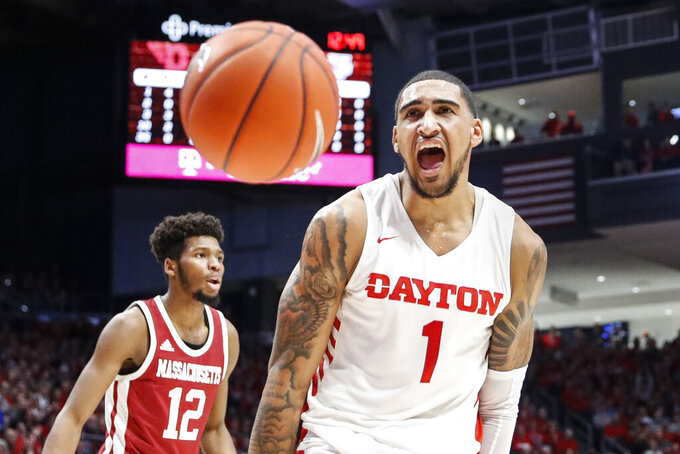 DAYTON, Ohio (AP) — NCAA Tournament fans will be talking about Dayton a lot this year, and not only because of the First Four.

With March around the corner, the Flyers are No. 6 in the country with a re-energized fan base that hasn't seen anything like them in a long time. It's been a half-century since they've reached such heights.

Dayton's main impact on the tournament the last few years was hosting the First Four, the play-in games between the four lowest ranked at-large teams. Now, the Flyers fans are ruminating about the possibility of a run to the Final Four.

“This is a basketball town,” said coach Anthony Grant, a former Flyers player who returned three years ago to rebuild the program. "That's probably an understatement, when you look at the history of the University of Dayton, what basketball is in this area.

“This is the beginning of March Madness each year. That speaks for itself.”

With one of the deepest and most balanced lineups in the country, these Flyers could have a lot to say about how the Madness plays out.

Dayton (20-2, 9-0 Atlantic 10) put itself in the national spotlight with a spectacular run at Maui in November, thumping Georgia and Virginia Tech before losing to Kansas in overtime. The only other loss was to Colorado in overtime at the Chicago Legends event.

What's most impressive about the Flyers has more to do with some other numbers.

“We love sharing the ball,” said forward Obi Toppin, whose alley-oop dunks are the punctuation mark to Dayton's pass-it-around style. “We know giving up a good shot to get a better shot is always the right way to go.”

The 6-foot-8 Toppin has 157 dunks in less than two seasons at Dayton, which was one of the few teams that showed an interest. Toppin — his full first name is Obadiah — was a late bloomer at Ossining High School in New York, measuring only 6-foot-2 as a junior.

Toppin found Dayton, and the Flyers have been finding him ever since. The Flyers' ball movement gets defenses out of position and Toppin to slip behind a defender to slam down a pass.

“I have really great teammates,” Toppin said. “They're putting me in position to be successful. All the credit goes to them for me getting the dunks.”

It's far from a one-man show.

The Flyers have a little bit of everything on offense, which is why they're so tough to guard. Jalen Crutcher has a team-high 53 3-pointers while shooting 42% from beyond the arc. Trey Landers shoots 61% from the field, including 40.4% on 3-pointers.

Sixth man Ibi Watson made one start this season because of injury, scored 30 points and went back to the bench. He shoots 44% from beyond the arc.

Landers, a senior guard, grew up in Dayton. He was part of the drop-off the last two years, when the Flyers went from NCAA Tournament participants to spectators. They finished 14-17 in 2017-18, Grant's first season.

“You've got to go through something to become something,” Landers said. “I'm a big believer in that. We're trying to keep this team together because we know how special this team can be.”

The Flyers know that they'll ultimately be measured by how far they go in March.

Grant was a freshman on the 1984 team that lost to Georgetown in the Elite Eight.

“There's been a lot of great teams, a lot of great coaches who have been here,” Grant said. “So there's a lot of pride and a lot of responsibility that our guys have to continue to represent the university, the community and the guys that have come before them.”

The last two years, Flyers fans were relegated to cheering for one of the First Four teams at University of Dayton Arena. It's an entirely different outlook this year.

“Now we think we can win a national championship here,” Crutcher said.