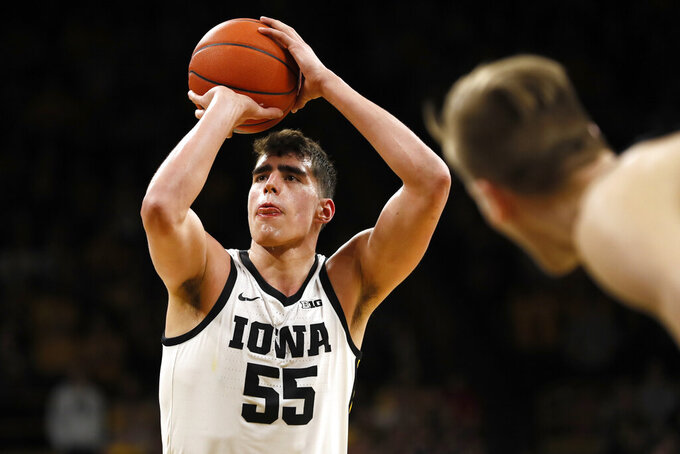 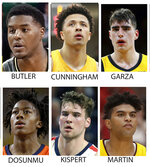 The coronavirus pandemic initially clouded Luka Garza’s decision whether to stay at Iowa or leave for the NBA. The uncertainty of the 2020-21 college basketball season and NBA draft made a tough choice even tougher.

Once Garza decided to stay in Iowa City, he was all in. No doubts going forward.

Garza was rewarded Wednesday by being the lone unanimous selection on The Associated Press preseason All-America team, one of many awards the talented big man has received prior to his senior season.

“I couldn’t be more excited about this year and coming back,” Garza said. “Going through the process, I learned a lot, but at the end of the day, going through this team’s potential, I felt like this was something I couldn’t turn down and not be a part of.”

Garza was one of college basketball’s dominant players as a junior, averaging 23.9 points and 9.8 rebounds per game while shooting 54% from the floor. The 6-foot-11 forward was a first-team AP All-American and finished second to Dayton’s Obi Toppin in national player of the year voting.

Iowa was ranked a program-high No. 5 in the AP preseason Top 25, in large part due to Garza’s decision to return.

“He might average a point or two less, but all that kid cares about is winning,” Iowa coach Fran McCaffrey said. “He’s put the time in. He’s not rested on his accomplishments. He’s hungrier than he’s ever been. There’s no better example for these young guys than Luka Garza.”

Same could be said for Butler.

Baylor looked like a potential Final Four team a year ago before the pandemic canceled the season, and it could be in the mix again now that Butler is back after withdrawing from the NBA draft. The Bears were No. 2 in the AP preseason poll, highest in school history.

“Jared has shown tremendous growth in his first two seasons at Baylor, both on and off the court,” Baylor coach Scott Drew said. “He has always been a great teammate with an infectious personality and now that he’s an upperclassman, he’s taken on more of a leadership role.”

The dynamic Dosunmu also took a look at the NBA before deciding to return, a huge boost for the No. 8 Illini.

The 6-5 guard was the first Illinois player in 20 years to lead the team in scoring as a freshman and sophomore. Dosunmu can do a little of everything on the court, averaging 16.6 points, 4.3 rebounds and 3.3 assists while shooting 48% from the floor last season.

Cunningham arrived in Stillwater with plenty of hype as the highest-rated recruit in school history. The athletic 6-8 guard can play the point or fill it up when he wants to, putting him at the top of numerous NBA draft boards for 2021.

Cunningham dominated as a high schooler in Florida and is expected to have a similar impact in the Big 12 and beyond.

Gonzaga was the AP preseason No. 1 for the first time and Kispert’s decision to return was a big part of it.

The 6-7 senior is a superb 3-point shooter (44% last season) and a good slasher to the basket. He averaged 13.9 points and 4.0 rebounds on a deep team last season and will be a key cog on a team with Final Four aspirations.

Martin started his career at Arizona State as the bouncy-haired energizer off the bench, lifting his team with pizazz and hard-nosed defense. The 6-foot guard has since developed into an unquestioned leader on a team loaded with talented guards.

Martin averaged 19.1 points, 4.1 rebounds and 3.1 assists last season and his decision to bypass the NBA to stay for his senior season has expectations running high for the 18th-ranked Sun Devils.

He is Arizona State’s second preseason AP All-American, with Ike Diogu in 2003-04.