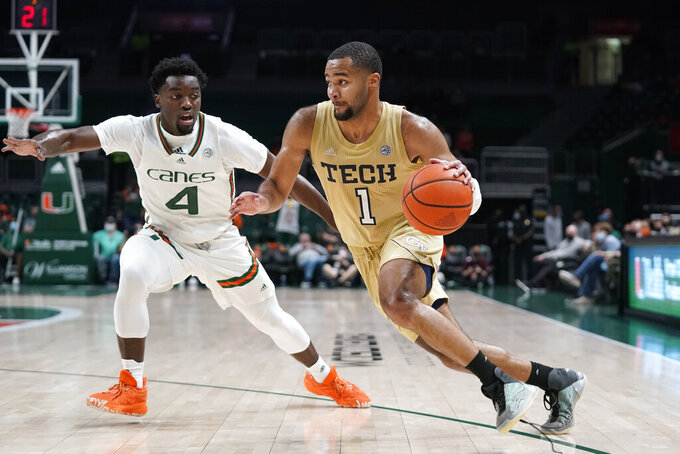 FILE - Georgia Tech guard Kyle Sturdivant (1) drives past Miami guard Bensley Joseph during the first half of an NCAA college basketball game, Wednesday, Feb. 9, 2022, in Coral Gables, Fla. Georgia Tech is basing hopes for a winning season on a large group of returning players, even if no one in the group is likely to be included on preseason all-star lists. Seniors Rodney Howard and Kyle Sturdivant are the top returning players. (AP Photo/Wilfredo Lee, File)

ATLANTA (AP) — Georgia Tech is basing its hopes for a winning season on a large cast of returning players, even if there are no likely all-star candidates in the group.

There’s no established big name among the eight returning players, so coach Josh Pastner says “The star of our team is our team.”

“Yes, we’ve got a lot of guys back, but these two we’re really relying on to have a really good year for us,” Pastner said. “For our team to be successful, these guys got to really be good.”

Pastner and the Yellow Jackets are hoping to move past a poor 2021-22 season.

After guiding Georgia Tech to the 2021 ACC tournament championship, Pastner dared to dream of big success as he prepared for the 2021-22 season. Much of that optimism was based on the belief guard José Alvarado and center Moses Wright, the AP ACC player of the year in 2021, would return.

Pastner said he already was thinking about the NCAA Tournament when finalizing last season's schedule “because I thought we had a realistic shot at going to the Final Four with those two guys.”

Then Alvarado and Wright made late decisions to enter the NBA draft, and those big dreams were dashed. The Yellow Jackets finished 12-20 overall and 5-15 in the ACC while losing 10 of 13 to close the disappointing season.

Sturdivant said “this year is going to benefit” from the experience of the returning players.

“It’s definitely giving me a sense of comfortability knowing the guys, and this is our second year playing together, so it’s a sense of knowing where people like the ball and knowing where we’re going to have our spots to attack the defenses at,” Sturdivant said.

Dallan “Deebo” Coleman averaged 6.2 points and started five games as a freshman last season, including one in the ACC Tournament. Coleman was the Yellow Jackets' top signee a year ago and made 43 of 104 (41.3%) of his 3-point attempts.

Another sophomore, shooting guard Miles Kelly, scored in double figures in each of the Yellow Jackets' last two games.

In 2021, Pastner received a three-year contract extension through the 2025-26 season. A bounce-back season for the Yellow Jackets would help Pastner make a good impression on newly hired athletic director J Batt.

Pastner has produced only one NCAA Tournament team in six seasons at Georgia Tech. His overall record is 94-96, including a 47-64 ACC mark. His teams have finished 10th or lower in the ACC in four of his six seasons.

Terry was a three-year starter at Gardner-Webb, where he averaged 14.3 points while starting all 31 games last season. He scored 16 points at Arkansas and 15 at Duke in back-to-back games last season. Terry scored 14 points in a win at Georgia.

Pastner said he wanted “to make sure that we had a little bit of a better balance” in this year’s schedule. The Yellow Jackets open the season on Nov. 7 at home against Clayton State.

Among other nonconference opponents are Georgia State, Georgia, Utah and Iowa. Georgia Tech opens its ACC schedule at No. 1 North Carolina on Dec. 10.