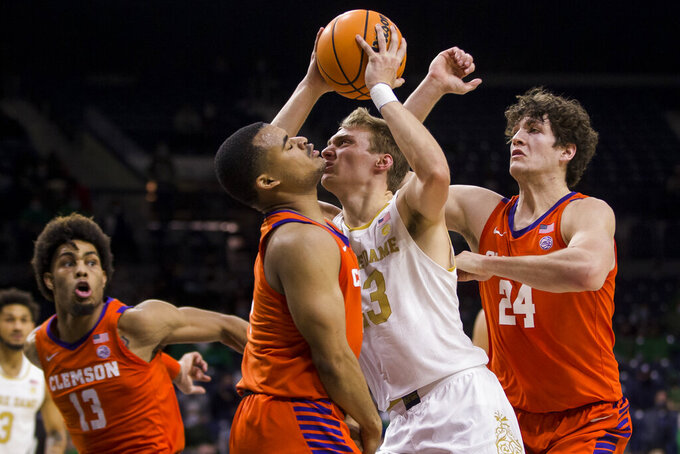 SOUTH BEND, Ind. (AP) — Dane Goodwin had 21 points and seven rebounds, freshman Blake Wesley scored 16 of his 20 points in the second half and Notre Dame won its sixth straight game, 72-56 over Clemson on Wednesday night.

Notre Dame made its first six shots of the game, capped by back-to-back 3-pointers by Nate Laszewski and Goodwin, for a 15-6 lead. The Irish missed their seventh shot, but Goodwin grabbed the offensive rebound and put it back for an 11-point lead.

Notre Dame held at least a 14-point advantage in the second half and led by as many as 23 to easily top Clemson's previous season high of an 11-point deficit. The Tigers made their first 3-pointer of the second half with 11:06 left to trail 55-36.

Goodwin entered having missed eight straight 3-pointers in his last two games, but made all three of his attempts against Clemson. He finished 8 of 10 from the floor for Notre Dame (10-5, 4-1 ACC).

PJ Hall scored 14 points and Hunter Tyson added 12 for Clemson (10-6, 2-3), which was aiming to win three straight conference road games for the first time in 25 years.

Clemson entered ranked No. 3 in the nation with 40.9% shooting from 3-point range, but made just 2 of 16 in the first half while Notre Dame made 6 of 11 through the opening 14 minutes. The Tigers missed 10 straight shots late in the first half, and trailed 39-22 at the break.