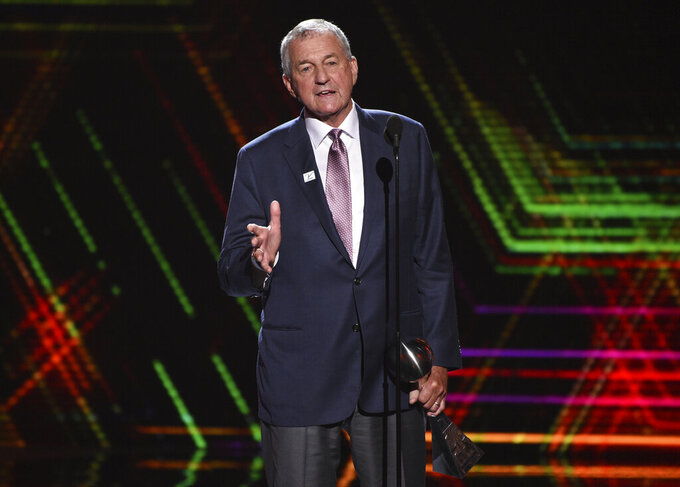 HARTFORD, Conn. (AP) — Hall of Fame basketball coach Jim Calhoun has been accused of sexual discrimination by a former associate athletic director at the University of Saint Joseph, the Division III school where Calhoun now works.

Jaclyn Piscitelli filed a lawsuit Wednesday in U.S. District Court against the small Catholic school in West Hartford, which began admitting men in 2018. She alleges violations of Title IX, the federal law designed to ensure equal opportunities for women and girls in education, including athletics.

Piscitelli's attorneys say she was fired in June after complaining about the conduct of men in the athletic department, including the 77-year-old Calhoun, whom she alleges helped turn the department into "a boys club" after he was hired to form and coach the school's men's basketball team.

Diana Sousa, a school spokeswomen, said the university does not comment on pending litigation.

"We have received and are reviewing the lawsuit," she said in an email. "The University of Saint Joseph takes compliance with all matters relating to Title IX very seriously."

A message seeking comment was left for Calhoun, who is not named as a defendant in the lawsuit. The suit seeks Piscitelli's reinstatement, back pay and other unspecified monetary damages.

Piscitelli alleges, among other things, that the former UConn coach once called her "hot" and forced her to perform menial tasks, including opening the door to Calhoun's office for him, even when he had the keys.

"There was an instance in which Calhoun knocked a number of single-serve coffee 'K-cups' onto the floor and stepped on them, creating a mess of coffee grounds and packaging on the floor and made plaintiff clean them up, stating that if he made such a mess at home, his wife would clean up after him," according to the lawsuit.

Piscitelli also alleges that she was belittled by other male members of the athletic department who received preferential treatment and would "frequently leave work to play golf with Calhoun during the workday."

Calhoun, who has a lifetime coaching record of 889-392, retired from UConn in 2012 with three national titles. He turned UConn into a feeder school for the NBA, sending more than two dozen players to the league, including Ray Allen, Richard Hamilton and Kemba Walker. He was inducted into the Naismith Hall of Fame in 2005.

Calhoun said he returned to coaching (despite battling stomach cancer) because he liked the idea of building a program from scratch. He recruited the Saint Joseph team (17 freshmen and three transfers), put together the schedule and led fundraising for a new gym.

He guided the team to 16-12 record in its inaugural year and won a special ESPY award in July for his career as the nation's "Best Coach."