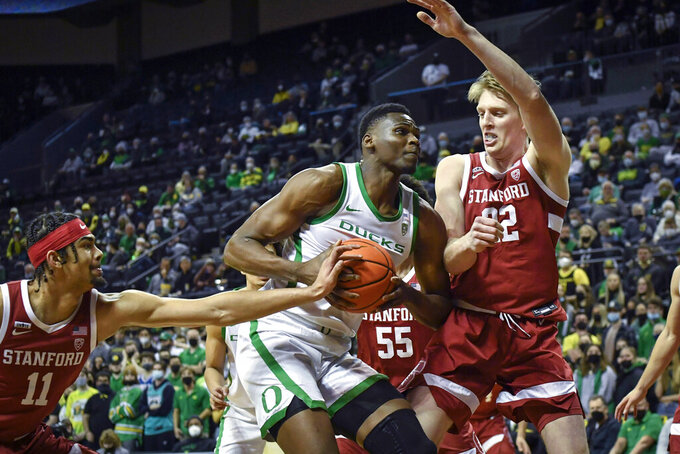 Stanford forward Jaiden Delaire (11) gets a hand on the ball as Oregon center N'Faly Dante (1) is guarded by Stanford forward James Keefe (22) during the first half of an NCAA college basketball game Thursday, Feb. 10, 2022, in Eugene, Ore. (AP Photo/Andy Nelson)

EUGENE, Ore. (AP) — De'Vion Harmon had a season-high 21 points, Will Richardson scored all 12 of his in the final 10 minutes and Oregon defeated Stanford 68-60 on Thursday night for the Ducks' fourth straight win.

Maxime Raynaud and Michael O'Connell scored 11 points each and Harrison Ingram and Brandon Angel had 10 apiece with Angel grabbing 10 rebounds for Stanford (14-10, 7-7), which has lost two straight. Jaiden Delaire, who averages 11 points a game and made a buzzer-beating 3-pointer in scoring 20 points in Stanford's 72-69 win over Oregon on Dec. 12, was scoreless in 19 minutes.

Oregon quickly extended an eight-point halftime lead when Dante finished an 8-2 half-opening run with an emphatic dunk. The Ducks didn't get another bucket for over six minutes but still had a five-point edge when Richardson scored midway through the half to end the drought.

Stanford's Raynaud cut the lead to three with a basket moments later, the closest the Cardinal would come. Ingram missed a 3-pointer with 35.6 seconds left that would have cut the lead to two. Richardson then made four straight free throws.

Harmon scored 12 points in the first half when Oregon led almost the entire way and took a 32-24 lead.